From: "The Council for National Policy: Selected Member Biographies"
http://www.seekgod.ca/cnp.a.htm#abramhoff 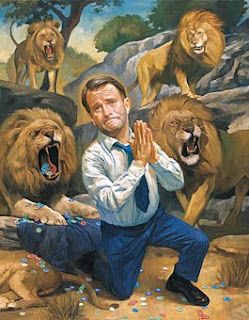 In the 1984-85 Council for National Policy Annual Directory, it stated under his bio; "National Chairman, College Republicans; under his leadership, College Republican National Committee has become the largest, most active student political organization in America; Chairman, United Students of America Foundation, dedicated to educating students on the need to defund political activism on campus; Executive Producer, "Fallout", a student radio program.; President, United Students Press Service; Publisher, New American Magazine, a national monthly conservative student magazine; College Republicans confront leftist groups on campus and promote the conservative agenda...." He was based in Washington DC at that time with the United Students of America Foundation address being his contact. He was also a law student by then.

Jack Abramoff is an Orthodox Jew with close ties to Rabbi Lapin/Toward Tradition and movie critic Michael Medved. He was also a supporter of CNP's Tom Delay, whom Delay once called "one of my best friends."

"In July 2002, at the height of the anti-Jena campaign, Bauer and Rabbi Daniel Lapin, a fixture at Christian-right events, founded the American Alliance of Christians and Jews. On the group's board were Dobson, Robertson, Falwell and one Jack Abramoff. Lapin's organization, Toward Tradition, which administered the AACJ, received $25,000 from one of Abramoff's gambling industry clients in 2000; took $75,000 from Abramoff and his clients; and then, upon Abramoff's written instructions, hired the wife of Tony Rudy to the tune of $5,000 a month. Rudy, who was Tom DeLay's deputy chief of staff at the time, later a lobbyist, has been named in Abramoff's guilty plea" [http://www.thenation.com/doc/20060220/blumenthal ]

From the 2001 article The Height of Hypocrisy by Josey Ballenger:

"...In the late 1980s and early 1990s [CNP's] Dan Burton and [CNP's] Republican Senator Jesse Helms worked with the International Freedom Foundation, a Washington-based organization in part clandestinely funded by the South African military to prop up overseas support for apartheid. The goal of the anti-communist group was to gather intelligence on, and discredit, the then-banned African National Congress. Burton and Hatch voted against key 1986 legislation banning trade and investment with South Africa, even when most of their party moved across the floor to support it...It is the height of hypocrisy that Orrin Hatch or Dan Burton would be opposed to anyone breaking sanctions against South Africa," said Salih Booker, who was the Democratic professional staff member of the House foreign affairs subcommittee on Africa in the mid-1980s. He is now executive director of the Africa Policy Information Centre, a non-profit advocacy organization in Washington. Dan Burton called the freedom movement of the ANC a 'terrorist' organization and spent most of the time attacking their leadership, notably Nelson Mandela," Booker said, noting that Burton was the ranking Republican on the Africa subcommittee at the time. "He never had a word against the white supremacists who ruled; he never met with those fighting for freedom, unlike others on the committee, Republicans and Democrats alike...after many of his Republican peers decided to support US trade and investment sanctions against South Africa, Burton remained a stalwart against the Comprehensive Anti-Apartheid Act of 1986. So did Hatch. That Bill " which became law by garnering a two-thirds majority to override president Ronald Reagan's veto " outlawed petroleum product exports and imports of South African coal, uranium, iron, steel, textiles, sugar and other agricultural products, and prohibited new investment in South Africa.

"The role of apartheid military intelligence in the International Freedom Foundation surfaced in 1995 when former South African spy Craig Williamson revealed that the former Pretoria regime spent up to $1,5-million a year until 1992 to underwrite "Operation Babushka", as the foundation was known.

"A member of the foundation's international board of directors disclosed that at least half of the foundation's money came from projects undertaken on behalf of South Africa's military intelligence, New York's Newsday reported in 1995 after a three-month investigation. And Colonel John Rolt, a South African army representative, confirmed that "the International Freedom Foundation was a former South African Defence Force project".

"Burton, Helms and other foundation participants, such as former Republican presidential candidate Alan Keyes, denied knowledge of the South African funding link. But Burton was an active participant. In 1987, for example, when Senator Edward Kennedy chaired a study of children in apartheid prisons, the foundation retaliated by sponsoring an investigation into the ANC's treatment of children, The Observer of London reported...

"The International Freedom Foundation was created in 1985 by Jack Abramoff, a conservative lobbyist who once represented the late Zairean dictator Mobutu Sese Seko. Abramoff and [CNP's ] Duncan Sellars, who served as the foundation's chair, were both Burton campaign contributors but denied knowing about the South African funding, according to media reports in 1995.

"Abramoff said the foundation had been funded by hundreds of contributors in the US, Europe and Israel. Apartheid South Africa's last president, FW de Klerk, cut off funding for covert "political" operations in 1992 and the foundation folded in 1994..."5

See Also for more on IFF including the Newsday report, Front for Apartheid, which appeared in Newsday, Sunday, July 16, 1995>http://www.geocities.com/CapitolHill/2807/lhiff.html

The IFF's headquarters was in north-east Washington, D.C., at 200 G Street, next door to the Free Congress Foundation". There were also contributions to IFF from a "Jay Parker".

It is unclear if this is the same Jay Parker> J. A. "Jay" Parker

Regarding being located next door to Paul Weyrich 's Free Congress Foundation, regardless of whether planned or coincidence, there are connections to other CNP members via that organization:

February 7, 2006 Update: On February 4, 2006, Jack Abramoff pleaded guilty to conspiracy and fraud in Florida. Prior to that, he had plead guilty to charges in Washington. In Florida, he "admitted counterfeiting a $23 million wire transfer to complete the $147 million purchase of SunCruz Casinos, a company that runs gambling cruises, in 2000". The Florida case has links to Abramoff's activities "as a prominent Washington lobbyist and to a guilty plea he entered a day earlier in Washington to fraud, conspiracy and tax-evasion charges." Abramoff is cooperating with prosecutors, "in what Assistant Attorney General Alice Fisher described as a broad corruption investigation," and many politicians are distancing themselves from him. Abramoff had been a major fundraiser to President Bush's campaign, raising at least $100,000. Many politicians are turning money over to charities that is known to have come from Abramoff or his associations.

According to the Center for Responsive Politics, which tracks campaign contributions, "Jack Abramoff, Indian tribes he represented and people connected to his SunCruz casino boat company gave a total of $4.4 million to more than 240 members of Congress and political committees from 1999 through 2005". [Source: USA Today.com Posted 1/4/2006 11:29 AM Updated 1/4/2006 10:57 PM; Abramoff pleads guilty to more charges; By Jim Drinkard and Andrea Stone, USA TODAY; http://www.usatoday.com/news/nation/2006-01-04-abramoff-florida_x.htm]

Michael Scanlon, his business partner, has also pleaded guilty to corruption charges. James Dobson, Pat Robertson, Ralph Reed, Jerry Falwell, Tony Perkins, Gary Bauer, and other CNP and religious right leaders are being discussed in the press regarding their associations with Jack Abramoff and Tom DeLay and whether they were privy to their respective activities. Footnotes 3
Posted by Alex Constantine at 5:45 AM