Children with "Soul Vision":" ... 'I was looking at the younger daughter who was sitting across from me and she was staring directly at me, it was almost like she was looking into my soul.' ... "

Satanism: "... One of the men, William Clark, described a strange display on the dashboard of Garrido's car. He said religious symbols — including a pentagram — were glued onto the dashboard, along with an array of nude baby dolls. Law enforcement officials did not return calls to confirm the display. ... " 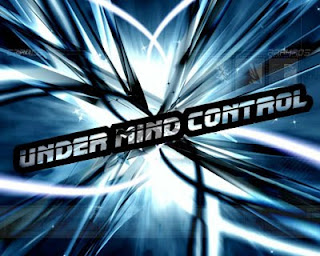 The campus police officer whose unease triggered the arrest of Philip Garrido for the kidnap of Jaycee Lee Dugard has described how his daughters looked like "brainwashed zombies."

Officer Ally Jacobs sat in on a meeting with Mr Garrido and his daughters after he requested permission to distribute leaflets on the Berkeley campus of the University of California.

But her suspicions were aroused by the strange behaviour of the two girls - and led to the eventual release of their mother, Jaycee Lee Dugard, after nearly two decades of captivity.

She said Mr Garrido arrived with the girls, aged 11 and 15, who stared at their father "like God" during the meeting. "They had this weird look in their eyes, like brainwashed zombies," she said. ... 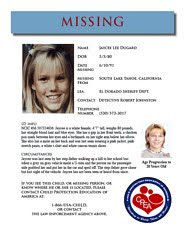 Two US policewomen say the "robotic" behaviour of two girls accompanying Phillip Garrido led to his arrest over the abduction of Jaycee Lee Dugard.

The officers met Mr Garrido and the two girls as he sought to hold a religious meeting on a California campus.

The officers said they were alarmed at the girls' "weird" behaviour. ...

Officer Jacobs said something about the girls, aged 11 and 15, alarmed them.

"I think Lisa asked, 'do you guys go to school?' and they both, like robots, [said] 'we're home schooled'."

The officer said they noticed the girls were "extremely pale in comparison" to Mr Garrido, and had "penetratingly blue eyes and I just got a weird uneasy feeling".

"I was looking at the younger daughter who was sitting across from me and she was staring directly at me, it was almost like she was looking into my soul.

"The older daughter, her eyes were darting up at the ceiling she was looking at her dad and just in awe, it looked like she was in worship of him."

The officer added: "I kind of got the feeling that these kids were like robots. It was my intuition." ...

... Garrido was known locally as "creepy Phil", while Nancy, who had married him in 1981 while he was still in prison, was described as "standoffish". Her brother-in-law has been quick to suggest that Nancy was a "robot" who "would do anything" Garrido asked and there is some evidence she was in thrall to her 6ft 4in husband ...

The couple's behaviour became more of a concern about five years ago when Garrido developed a fascination with hearing voices, believing that he had some sort of telepathic hotline to angels. His conversations had become peppered with a wired mix of psychobabble and religion, allusions to mind control and choice biblical references. ... He claimed to have created a device that would "pronounce words through my own mental powers" ...

Garrido's secret was finally uncovered due to the concerns of security staff at the University of California's Berkeley campus. ... They [the children] had pale complexions and their actions caused the officer, Ally Jacobs, to study them closely. ... "I wanted to basically ascertain if these girls were OK. Not from a cop standpoint, from a mother's standpoint," she said in an interview with ABC news. "It was like a wall, like talking to a robot almost. It was more like they were programmed. The older one almost had pride in her father, she was just looking at him like he was a superstar. They had this weird look in their eyes like brainwashed zombies. Their clothes were almost like Little House on the Prairie-type attire. ...

... To some, he announced plans to give up the printing business and preach full time. Last year, he launched a company, God's Desire. His blog, called "Voices Revealed," describes a fascination with mind control and the ability to hear the voices in people's heads. "The Creator has given me the ability to speak in the tongue of angels in order to provide a wake-up call that will in time include the salvation of the entire world," he wrote.

On Monday, the same day he first sought an event permit at UC Berkeley, he delivered documents to the FBI in San Francisco. FBI spokesman Joseph Schadler described the documents as similar to the writings found on Garrido's blog. ...

"He seemed kind of hyper. He would rush around, passing out bottles of water and sometimes homemade sandwiches. He was always in a hurry," said one of the older, bearded campers, who identified himself only as "The Hate Man." ...

One of the men, William Clark, described a strange display on the dashboard of Garrido's car. He said religious symbols — including a pentagram — were glued onto the dashboard, along with an array of nude baby dolls. Law enforcement officials did not return calls to confirm the display. ...

'I told my wife, it's no different to Manson and those girls,' said Ron, 65, a retired electrician. 'She was under his spell - a robot. It just seems so bizarre. Crazy, crazy, crazy.'

Quite so. But listening to Garrido's deluded attempts to justify Jaycee's abduction during a rambling radio interview from his prison cell yesterday, and examining his bizarre internet blog, it becomes clear that the likeness to Manson is more than physical.

Just like the twisted Californian cult leader, he is a dangerously self-absorbed narcissist. And, as with the demented Manson, he is at pains to convince us that he possesses supernatural gifts and uses risible, quasi-religious mumbo-jumbo to mask his depravity. ...

FULL STORY: http://www.dailymail.co.uk/news/worldnews/article-1209822/Americas-Fritzl-No-Philip-Garrido-Charles-Manson-Mark-Two.html
****
CENSORSHIP? - ANY SUGGESTION OF MIND CONTROL WAS CAREFULLY FILTERED OUT OF THE CNN REPORT. Compare the above reports with CNN's story on the Garrido arrest. This version is too meticulously sanitized to not be deliberate:

... "[Garrido] was clearly animated, he was very passionate, he was full of life about the things he wanted to talk about," Campbell said. "The girls sort of were recessed in the background. And they were young. It was one o'clock in the afternoon. They weren't in school. They were pretty much unresponsive emotionally, extremely pale ... there was just something about the girls that wasn't right."

She thought the encounter was strange enough to run a background check on Garrido, which revealed that he was on parole after a rape conviction and was a registered sex offender. Campbell asked Jacobs to sit in on the meeting the next day.

Jacobs said she began talking to the girls, trying to engage them in conversation. Checking for any abuse, she asked one girl about a bump on her eye, and the girl told her it was a birth defect, she said.

"The youngest girl was across from me," Jacobs said. "And she was very intently staring at me and smiling in a very eerie way. The older daughter was looking at Mr. Garrido, and not looking at us, not making eye contact with us. And her eyes were darting around at the ceiling, and [she] would give really quick, clipped one-word answers and would glance at us and back up at him."

She said, "My police intuition was kicking in, but I would say it's more of a mother's intuition. I was worried for these little girls. I knew something wasn't right. I could kind of see it in their eyes, although I really didn't know what it was. And just being the protective mom that I am, my reaction was to try and do what I could to help them."

Jacobs called Garrido's parole officer to tell him about the meeting. "And he stopped me dead in my tracks," she said. "And he said, 'He doesn't have daughters.' And that's when my heart kind of sunk down into my stomach. And I said, 'Well, he introduced them as his daughters. They had his blue eyes. They were calling him "Dad." They even mentioned an older sister at home. So I had no reason to believe that they were anything but his daughters.'" ...

FULL STORY: http://edition.cnn.com/2009/CRIME/08/31/missing.girl.officers/
****
Garrido Seems to Believe He can Control the Media
BBC

... A picture is emerging of a controlling man, obsessed with religion, who told the FBI he could control minds.

... He gave a rambling interview from prison to the KCRA television channel in California, claiming his was a "powerful, heart-warming story, one that you're going to be really impressed by". He said thousands would testify in his defence and there would be powerful witnesses. He had turned his life around, he said.

Criminal psychologist Dr David Holmes said the interview revealed someone who was "very, very coherent", using his claim of being divinely saved as a reason he should be immune from prosecution and not giving in to the interviewers questioning.

"A lot of people with personality disorders defend themselves in this way and don't allow other views to be in their social proximity, which is probably what he's done in his household. It's a form of brainwashing," he said Dr Holmes. ...

From: Phillip Garrido didn't leave horror on the shelf

... Garrido is [a] fan of the Psychosphere trilogy by British writer Brian Lumley. The books revolve around a world in which people use their mental powers to control others. Garrido calls himself "the man who spoke with his mind" and believes he has telepathic abilities. Also in the collection are a handful of children's favourites including The Chronicles of Narnia by CS Lewis. ...

AC, Can you please do one of your famous in depth investigations into this? I have been checking back daily expecting that you would. THis story seems right up your alley and I expect many others feel the same. Especially being when you type in "Phillip Garrido + mind control" into Google, your blog comes up 2nd! I expect many others have been checking for your expertise.