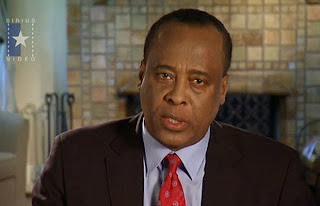 Law enforcement sources tell TMZ the L.A. County Coroner cannot pinpoint the time of Michael Jackson's death ... but paramedics say when they arrived they believed he was dead for at least an hour and maybe longer.

Dr. Conrad Murray's statement to LAPD detectives lays out a timeline in which Dr. Murray administered Propofol at 10:40 AM and then ten minutes later (10:50) he walked out of the room, went to the bathroom and returned two minutes later (10:52) to find Jackson was not breathing. He did not have anyone call 911 until 12:21 PM ... approximately an hour-and-a-half later.

Sources say cops are suspicious of Dr. Murray's account. They say when Dr. Murray was interviewed by them two days after Jackson died -- his lawyer by his side -- the doctor's account seemed "scripted." ...

From "The last days of Michael Jackson"
Independent
August 23 2009

... Jackson had moved to Vegas after returning from the Middle East in 2006, taking up residence with his children in a 10-bedroom mansion west of the Strip. Jack Wishna, a wheeler and dealer in the gaming industry who had lobbied Donald Trump to open a resort in town, was trying to help Michael to land a series of shows in Vegas that could pay off his mounting debts, but the deal wasn't going well. Wishna would later tell CNN that the singer seemed "drugged up" and "incoherent" and was often so weak that he needed a wheelchair to get around. Jackson and his children rarely left the mansion, except for shopping excursions. When they did go out, the kids wore feather-and-mesh masks to shield them from photographers, their father by their side in his odd uniforms from some imaginary army, replete with epaulettes and armbands. The Vegas shows were eventually cancelled because of Jackson's condition, Wishna said. Around that same time, Jackson's sister Janet reportedly tried to stage an intervention with Michael to curb his drug use, but failed.

By that point, Jackson had been spiralling downward for years. The breaking point had come as he was driven home in a motorcade on June 13, 2005, just after his acquittal on 10 counts of child molestation and related claims. The mood in the car was subdued. Arriving at Neverland Ranch, Jackson went upstairs and turned to Dick Gregory, a comedian and family friend who had known Michael since he starred in The Wiz. Jackson grabbed Gregory and clutched him tightly. "Don't leave me," he begged. "They're trying to kill me."

Gregory had the feeling that Jackson was referring to the whole world. Michael seemed paranoid and dehydrated. "Have you eaten?" Gregory asked him, knowing that Jackson often went without food for days.

"I can't eat," Jackson responded. "They're trying to poison me."

"Do me a favour," Gregory told him. "Get out of here. All of these people have double-crossed you."

As melodramatic as it sounds, Gregory may have been right. Jackson had long lived in an alternate world of yes men who seemed to come and go, alternately bilking the singer or accusing Michael of bilking them. Not even his family seemed to be able to get past this world of opportunism. By the time of his molestation trial, this circle had grown increasingly shady. There was Marc Schaffel, a former gay-porn producer who advised Jackson for years, and Al Malnik, a lawyer who reportedly once represented mobster Meyer Lansky. There were two German 'entrepreneurs' who managed to get Jackson to endorse a sports cola, known only as 'Mystery Drink', which was briefly sold during the HIStory tour. And there was his security detail from the Nation of Islam, which was rumoured to have come to blows with several of Jackson's brothers who had expressed concern over the Nation's growing sway over Michael's life.

Jackson knew he had to get out -- but his choice of a saviour only made things weirder. That June, to help him resolve his finances and escape the glare of the media spotlight, Jackson turned to a man he had never met: Sheik Abdullah bin Hamad bin Isa Al-Khalifa, a prince of Bahrain. The sheik had befriended Michael's brother Jermaine, who had converted to Islam and spent four months living in Bahrain. Now Abdullah helped pay off some $2.2m in legal fees for Michael, and by the end of the month, Jackson -- with his three young children and staff in tow -- went to live with the prince. ...
Posted by Alex Constantine at 11:43 PM

Very good thorough blog. You are right on the mark with your info. Thanks.