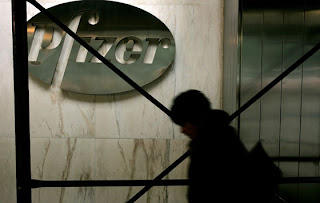 Also see: "Pfizer Investigator Stalked Neurontin Witness; Who Paid Off the Plaintiffs?"and "Did Pfizer Intimidate a Key Plaintiff's Witness on the Eve of the Neurontin Trial?"

Pfizer has asked a federal judge to remove a restraining order that banned its private detective — a former CIA agent — from contacting a “terrified” witness in the Neurontin litigation.

BNET noted in July that Pfizer sent a pflunky, James Danforth, to the home of David Franklin, a former Warner-Lambert employee turned whistleblower in the case.

Franklin told the court that he was “terrified” when Danforth showed up at his home, told him “you will see me, this isn’t going to end,” and only left after Franklin called the police. According to this court transcript:

… we were all, quite frankly, terrified. I left Pfizer 13 years ago tomorrow, and when I was leaving, I — we received threats that there was no way the company was going to just let this go, so after 13 years, having a Pfizer representative standing at our driveway scared the hell out of us … I’m sorry, I left Warner-Lambert. I left Warner-Lambert, yes.

He later told the judge:

Pfizer says the incident has been exaggerated to make the company look bad in the media, and that Danforth did nothing more than ask to speak to a witness in the case:

Pfizer certainly did not, as Mr. Franklin told this Court, “send[] a thug to [his] home to wave at the window at [his] eight-year-old daughter.”

On the afternoon of Monday, July 27, he made a brief and unobtrusive attempt to contact Mr. Franklin simply to determine whether he was available to speak with counsel for Defendants.

it appears that Mr. Franklin’s exaggerated account was calculated to inflame the jury against, and attract negative media attention to, Pfizer.

There’s a great account of the incident and the back-and-forth on the issues at AmLaw.

Danforth himself has filed a declaration in the case, which basically says that Franklin’s account of the incident is completely wrong:

I was stunned to read what Mr. Franklin said about my conduct and interaction with Ann Laquerre [Franklin's wife]. I do not feel that I did anything improper or unusual in my attempt to contact Mr. Franklin. I acted professionally at all times and followed the normal standards and procedures that I use in attempting to contact any witness. I never acted hostilely or with malice. I never threatened or harassed Ms. Laquerre, Mr. Franklin, or anyone in their family. I never told Ms. Laquerre that I knew everything there was to know about her or her family or that I knew the location of their daughter in college.

You can read Danforth’s resume here. He was a CIA special agent/team leader at the spook shop from 1980 to 1983, he claims. He specialized in hostage situations and terrorism.

http://industry.bnet.com/pharma/10003548/pfizer-defends-ex-cia-agent-who-terrified-neurontin-witness/
Posted by Alex Constantine at 11:10 AM