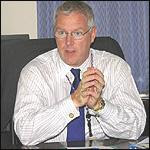 A finer point on it: "The two [Miller, Sr. and the mobster] were so close, Costello served as godfather to John Jr."
http://dic.academic.ru/dic.nsf/enwiki/1187729

Bearing in mind the fascinating Mafia link, see: "Reporter" John Miller's Foreknowledge-- More Media/Government Collusion in the Events of 9/11" - "There are many remarkable things we can learn about John Miller! Soon after this 9/11 'reporting,' he was promoted to co-anchor of 20/20 at ABC-TV. And within a year, he wrote a book that 9/11 happened because of 'intelligence agencies' failures. ..."
http://covertoperations.blogspot.com/2007/05/john-millers-foreknowledge-more.html

The multi-faceted godson of Frank Costello surfaces in some interesting places:

John Miller, a broadcast journalist who parlayed his expertise on terrorism into a career with local law enforcement and later the FBI, plans to leave the bureau to help lead reform efforts for the intelligence community. According to sources familiar with Miller's plans, he would move to the Office of the Director of National Intelligence, where he'd head up a team devoted to "analytic transformation." It was established in the wake of the 9/11 terrorist attacks to improve the ability of analysts to share information across bureaucratic boundaries and to encourage them to use new technologies, such as social networking. Since 2005, Miller has been the FBI's assistant director for public affairs, the bureau's top spokesman. Miller did not respond to e-mails or messages left with his office seeking comment. A spokesman for the Director of National Intelligence said the office had "no personnel announcements to make at this time."

Over the course of his career, Miller has alternated between covering terrorism as a reporter and joining ranks to fight it as a law enforcement official. In the early 1990s, he was one of a few reporters closely following the then nascent Al Qaeda network and its ties to the first World Trade Center attack in 1993. Miller became friends with agents in the FBI's New York field office, particularly John O'Neill, whose career in the bureau was the subject of a PBS Frontline documentary titled "The Man Who Knew," a reference to O'Neill's dogged pursuit of Al Qaeda and its shadowy leader, Osama bin Laden. In 1998, Miller became one of the few western journalists to interview bin Laden in person when he and a cameraman sat down with the terrorist leader in Afghanistan.

In New York, Miller earned a reputation as one of the most plugged-in reporters covering the FBI. In a 2003 review of a book that Miller co-wrote about the 9/11 attacks, New Yorker writer Malcolm Gladwell remarked on his reporting prowess in the wake of the first World Trade Center attack: "At the bombing site, he was continuously trailed by a knot of reporters -- I was one of them -- who had concluded that the best way to learn what was going on was to try to overhear his conversations." In 1994, Miller left media to become spokesman for the New York City Police Department. As he recalled in an interview with People magazine, "I thought, 'What if you spent your days not just talking about it? What if you were doing it?'"

After a brief stint with the NYPD, Miller returned to the news business. He was a correspondent for ABC News, where he continued to cover Al Qaeda and scored the interview with bin Laden. In 2002, he became co-anchor of ABC's news magazine program 20/20 with Barbara Walters. But the following year, Miller left journalism again, this time for a position with the Los Angeles Police Department, where he led the Counterterrorism and Criminal Intelligence Bureau, as well as the Major Crimes Division, which managed the department's bomb squad and hazardous materials unit.

In his new intelligence post, Miller would replace a veteran analyst and technologist named Mike Wertheimer, who spent the majority of his career at the National Security Agency. Wertheimer, who was the subject of a profile in National Journal, has overseen efforts to bring the intelligence community into the 21st Century. During his tenure, the intelligence community began using a social network system called A-Space, modeled after My Space and Facebook, which allows analysts from different agencies to share information. Wertheimer has also overseen the launch of Intellipedia, a resource modeled on Wikipedia, which allows users to write, and indefinitely re-write, articles in a collective fashion.

Despite Miller's law enforcement credentials, it's not immediately clear what technological expertise he would bring to the new job. Wertheimer, whom he would replace, spent 21 years as a cryptologist at the National Security Agency and rose to become the agency's most senior technical leader. Although his work leading analytic transformation has been focused partly on abstract issues such as workplace culture, many of his programs are technical in nature. The position is also not as high-profile as Miller's current role, which has allowed him to become one of the public faces of the FBI. -- Shane Harris