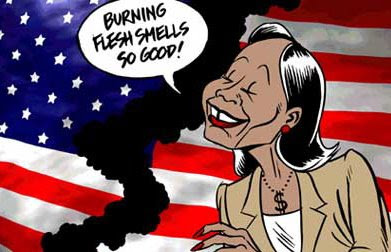 Bush Administration Torture Reveals How Deceptive Politics As Usual In Washington Has Become
Bill Lindner
May 09, 2009

After slithering out of Washington once their second stolen term was up, some former Bush administration officials are reportedly [see below] launching a behind-the-scenes lobbying campaign, trying to urge Department of Justice (DoJ) leaders to soften an ethics report criticizing lawyers who fraudulently 'justified' harsh interrogation tactics -- and most likely, to make sure the final version of the report does not include any information leading to further implications of former top Bush administration officials. The ongoing fight over investigating and prosecuting war criminals in the Bush cabal reveals just how deceptive politics as usual in Washington has become.

The draft report by the U.S. 'Justice' Department on the conduct of department lawyers who 'justified' the torture has reportedly been embraced by the Obama administration who has no intention of holding Bush administration officials accountable for the vast number of war crimes committed. Not doing anything about the crimes makes the Obama administration just as guilty and nullifies the fraudulently fallacious rhetoric of the U.S. being a nation of laws. ...

Focus Is Approval of Harsh Interrogations
By Carrie Johnson
Washington Post
May 6, 2009

Representatives for John C. Yoo and Jay S. Bybee, subjects of the ethics probe, have encouraged former Justice Department and White House officials to contact new officials at the department to point out the troubling precedent of imposing sanctions on legal advisers, said the sources, who spoke on the condition of anonymity because the process is not complete.

The effort began in recent weeks, the sources said, and it could not be determined how many former officials had reached out to their new counterparts.

A draft report of more than 200 pages, prepared in January before Bush's departure, recommends disciplinary action, rather than criminal prosecution, by state bar associations against Yoo and Bybee, former attorneys in the department's Office of Legal Counsel, for their work in preparing and signing the interrogation memos. State bar associations have the power to suspend a lawyer's license to practice or impose other penalties.

The memos offered support for waterboarding, slamming prisoners against a flexible wall and other techniques that critics have likened to torture. The documents were drafted between 2002 and 2005.

The investigation, now in its fifth year, could shed new light on the origins of the memos. Investigators rely in part on e-mail exchanges among Justice Department lawyers and attorneys at the CIA who sought advice about the legality of interrogation practices since been abandoned by the Obama administration.

Two of the authors, Bybee, now a federal appeals court judge, and Yoo, now a law professor in California, had a Monday deadline to respond to investigators.

Miguel Estrada, an attorney for Yoo, said, "As a condition of permitting me to represent Professor Yoo in this matter, the Department of Justice required me to sign a confidentiality agreement. As a result of that agreement, there's nothing I can say."

Maureen Mahoney, an attorney for Bybee, also cited the confidentiality requirement in declining to comment.

The legal analysis on interrogation prepared by a third former chief of the Office of Legal Counsel, Steven G. Bradbury, also was a subject of the ethics probe. But in an early draft, investigators did not make disciplinary recommendations about Bradbury.

In a separate effort to counterbalance the draft report, Attorney General Michael B. Mukasey and Deputy Attorney General Mark R. Filip wrote a 14-page letter before they left office this year. They described the context surrounding the origins of the memos, written at a time when officials feared another terrorist strike on American soil.

Both Mukasey and Filip were dissatisfied with the quality of the legal analysis in the wide-ranging draft report, sources said. Among other things, the draft report cited passages from a 2004 CIA inspector general's investigation and cast doubt on the effectiveness of the questioning techniques, which sources characterized as far afield from the narrow legal questions surrounding the lawyers' activities. The letter from Mukasey and Filip has not been publicly released, but it may emerge when the investigative report is issued.

A person who has spoken with both Mukasey and Filip said yesterday that neither had been solicited to approach new department leaders about the ethics report.

Late Monday, Assistant Attorney General Ronald W. Weich wrote senior congressional Democrats to offer an update about the status of the ethics investigation, which is being conducted by the Justice Department's Office of Professional Responsibility. Weich told Sens. Richard J. Durbin (D-Ill.) and Sheldon Whitehouse (D-R.I.) that Attorney General Eric H. Holder Jr. and Deputy Attorney General David W. Ogden "will have access to whatever information they need to evaluate the final report and make determinations about appropriate next steps."

Authorities did not signal in the letter when or in what form the report will be released. The biggest holdup had been that the content of the interrogation memos was classified, but the documents were released last month by the Justice Department. Sources said the highly anticipated report could emerge as soon as this summer.

Mary Patrice Brown, new chief of the Justice Department ethics office, told an audience of lawyers last night that her preference is toward "transparency" and releasing investigative reports on a case-by-case basis, depending on the "severity" of the misconduct and the public's interest.

Any disciplinary findings about the former Justice lawyers could energize calls within Congress and among left-leaning interest groups for criminal prosecution of Bush administration officials who authorized the interrogations and for an independent congressional inquiry into the origins of the practices.

In an interview yesterday, Durbin said it was too early to call for a special prosecutor or another congressional probe.

But, he said, many important questions remained unanswered. "It's a question of responsibility. In this chain of command, how far up did it go?"