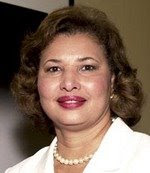 Renee Gill Pratt, a former state representative and New Orleans city councilwoman, was indicted by a federal grand jury Friday on federal racketeering charges that accuse her and members of the Jefferson political family of operating a "criminal enterprise" that raided nonprofit organizations created to help disadvantaged people.

The indictment of Gill Pratt comes nearly one year after a grand jury indicted her longtime boyfriend, Mose Jefferson; his sister, 4th District Assessor Betty Jefferson; and Angela Coleman, Betty Jefferson's daughter; on various charges of skimming money from nonprofit organizations that were supposed to help impoverished communities. A trial in that case was scheduled for early August but will be pushed back.

The indictment of Gill Pratt also includes the two Jeffersons, siblings of U.S. Rep. Bill Jefferson, and Coleman. The four operated "a criminal enterprise for the financial and political benefit of the defendants" from 1991 through 2006, according to a news release issued by U.S. Attorney Jim Letten's office.