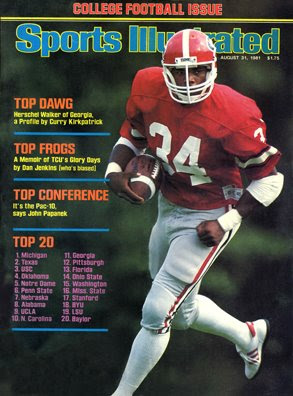 KILLEEN, Texas – They came on canes and crutches and knee braces and walking boots, about 50 Fort Hood soldiers in all, and that wasn't the half of their wounds. Some scars you can see. Some you can't.

They came to hear from Herschel Walker, who talked to them about pain that isn't always so obvious.

In his book, Breaking Free, Herschel revealed his struggles with dissociative identity disorder, or what once was called multiple personality disorder. Since the book's release, Herschel has been all over telling his story, from TV to high schools to military bases, the last in conjunction with University Behavioral Health out of Denton. ...

In a 30-minute monologue at Fort Hood last week, he retold his remarkable story.

Growing up poor in tiny Wrightsville, Ga., the fat kid with a stutter, bullied and browbeaten, he builds up, beats the impediment and fashions himself into the nation's top football recruit.

He leads Georgia to a national title and wins a Heisman and stars in Dallas, where he helps build Jimmy and Jerry's dynasty, if only by playing the centerpiece to the trade that led to Super Bowls. He never enjoys the kind of success in the NFL that he did in college, but then again, when you're voted the second-best college football player ever, it's a tough act to follow.

And this is what he tells the soldiers: "I didn't even really like football."

He tells them what were once long-held secrets. Voices in his head. Living a lie. Playing Russian roulette.

Herschel finally sought treatment, and this was his message to the troops: