Excerpt: "The curious double standard for doublespeak"
Virginian-Pilot
May 22, 2009 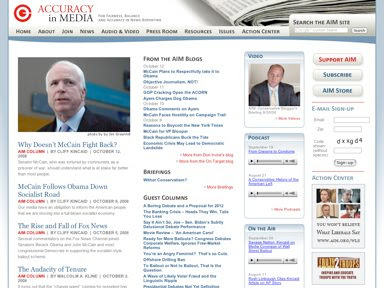 ... The charge of political correctness is leveled ordinarily by conservatives against liberals - especially in academia - who condemn speech or behavior as repugnant and demand obfuscatory alternatives or recantation. But there is no monopoly.

"Details continue to emerge about the FBI's failure to heed warnings of a terrorist attack on America," wrote Reed Irvine, the late founder of the right-wing watchdog Accuracy in Media, back in 2002. "Many of its mistakes seem to stem from the corrosive effects of political correctness. With all the zeal of a political commissar, [then-President Bill] Clinton imposed a harsh regime of political correctness on the federal bureaucracy during his eight years in power. The Bush administration has been too reluctant to root out holdovers - both policies and people - from the Clinton administration."

AIM's crusade against political correctness in all its forms continues, with one curious and notable exception. The group has lately bought full-page advertisements decrying the use of the word "torture" by the news media.

"By your continual use of the word 'Torture' to describe these interrogation techniques you have been misleading the world that the United States condones techniques of barbarous cruelty. The consequences could be horrendous," it said in a full-page ad in The New York Times last week. The ad concludes with a charge that the media is "aiding al Qaida in recruiting terrorists."

That charge of treason has been bandied for weeks by media outlets where torture is embraced and even fetishized. So has an odd and new kind of political correctness.

The reasoning goes something like this: The problem with the interrogation techniques employed by the Bush administration is not that they conform to every definition of torture, that in past conflicts they resulted in prosecution and even execution, or that they violate American obligations under its own law and international treaties. The real problem is that the media won't obscure what happened by choosing a politically correct euphemism like "enhanced interrogation techniques."

There's good reason for the media's reluctance. Waterboarding has been defined as torture since the Middle Ages. It is torture now, no matter what we call it. ...