"A dazzling opening show, Pioneers of American Abstraction, pegged Andrew Crispo as a dealer to watch. Major clients began to drop by, among them the Baron Hans Heinrich Thyssen-Bornemisza (called "Heini"), the Swiss steel heir whose collection is one of the world's greatest. Mr. Crispo's career really took off, according to Mr. France, when in 1975 a nasty incident occurred that involved the baron. His fourth wife, Denise, and her lover, Franco Rappetti (who was also the baron's dealer and whose relationship with his wife the baron apparently tolerated), tried to shake Mr. Crispo down for "commissions" on the Thyssen purchases. But Mr. Crispo said no. Three years later, Rappetti went out the window of a midtown apartment building. ... "

There Was Something Creepy About the Gallery
By Grace Glueck;
June 21, 1992 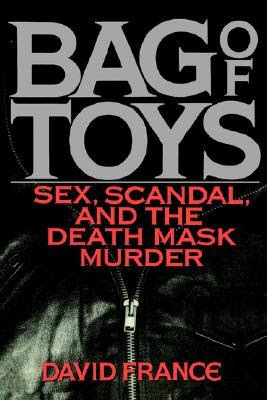 ALONG with high prices, drugs and laundered money, the excessive 80's brought genuine tabloid scandal to the New York art world. In 1985, Ana Mendieta, a Cuban-born artist, jumped, fell or was thrown to her death from a 34th-story window. Her husband, the well-known Minimalist sculptor Carl Andre, was later tried and acquitted. And in the same year, there was the sadomasochistic "death mask murder" case, involving the 57th Street art dealer Andrew Crispo and his assistant, Bernard LeGeros. Mr. Crispo was never indicted (he later went to prison on quite another ground: income tax evasion). But Mr. LeGeros currently is serving a prison sentence of 25 years to life.

However horrible murder may be for its victims and their loved ones, it does create employment -- at least the more sensational murders do -- for writers of what Truman Capote called the "nonfiction novel." We've already had Robert Katz's trashily titled "Naked by the Window," a 1990 account of the Andre case, and now there is "Bag of Toys," David France's exploration -- or should we say exploitation? -- of the Crispo affair. (The title refers to Mr. Crispo's name for the collection of sexual devices that he kept at the ready.) Although "Bag of Toys" is plenty titillating, let the reader beware. It may be a page-turner, but it's a stomach-turner, too. Mr. France doesn't stint on gruesome detail.

The "death mask murder" case began in March 1985, when some young boys found a charred and mutilated corpse in a smokehouse on the Rockland County property of a family named LeGeros. The victim -- wearing a black leather hood used in sadomasochistic rituals -- turned out to be Eigil Dag Vesti, a handsome young fashion student from Norway who had been missing from his downtown Manhattan haunts for several weeks. It soon developed, according to Mr. France, that Vesti had been murdered in a bizarre sadomasochistic scenario created by Mr. Crispo and Mr. LeGeros, a son of the couple who owned the estate. Mr. LeGeros confessed that he had fired the gun that killed Vesti, but said that he had done so at Mr. Crispo's behest.

As background to his account of the murder, Mr. France takes off on a voyeuristic tour of Mr. Crispo's life. The author admits that, lacking his subject's cooperation, he has ascribed to him -- and to others -- dialogue reconstructed from police notes, court depositions, published sources and so forth, which certainly makes the book vivid, if journalistically less than sound. Along the way the reader learns more than he -- or she -- may want to know about such matters as the action at sadomasochistic bars, the condition of Vesti's body when it was found and the sleazy client-attorney relationship between Mr. Crispo and Roy Cohn.

Mr. Crispo, Mr. France writes, "saw in the world a Procrustean conspiracy -- immutably rigid rules of expected conduct that required a rote response. Wherever possible, he rebelled." The son of an Italian mother -- and her French lover -- who deposited him newborn at an orphanage in southwest Philadelphia, Mr. Crispo grew up homosexual and street-smart, the author says. He started out turning tricks in Rittenhouse Square, Mr. France writes, but later his brashness and ingenuity led to more glamorous conquests, including the pianist Liberace and Henry McIlhenny, chairman of the board of the Philadelphia Museum of Art. According to Mr. France, Mr. Crispo also engaged in other less-than-wholesome enterprises, and in 1964, when Philadelphia got too hot, he migrated to New York.

Manhattan and its hustling art world were waiting. Mr. Crispo began as a runner, a lowly go-between who turns over paintings at an often minimal profit. But his boyish charm and good looks landed him a job with a respectable dealer. He worked there for five years before finding the backing that would enable him to open the Andrew Crispo Gallery, an expensive suite in the Fuller Building on East 57th Street, the aorta of the uptown art world. His lover, the decorator Arthur Smith, Mr. France says, made the gallery into a sumptuous showcase, attracting name talents to Mr. Crispo's stable of artists: Richard Pousette-Dart, Arman, Lowell Nesbitt. He built up a lucrative back-room operation -- reselling works by well-known artists of major movements -- in 19th- and 20th-century art.

A dazzling opening show, "Pioneers of American Abstraction," pegged Andrew Crispo as a dealer to watch. Major clients began to drop by, among them the Baron Hans Heinrich Thyssen-Bornemisza (called "Heini"), the Swiss steel heir whose collection is one of the world's greatest. Mr. Crispo's career really took off, according to Mr. France, when in 1975 a nasty incident occurred that involved the baron. His fourth wife, Denise, and her lover, Franco Rappetti (who was also the baron's dealer and whose relationship with his wife the baron apparently tolerated), tried to shake Mr. Crispo down for "commissions" on the Thyssen purchases. But Mr. Crispo said no. Three years later, Rappetti went out the window of a midtown apartment building.

Mr. France takes a reasoned view of Rappetti's demise as a suicide. But in any case, Mr. Crispo's help with the funeral arrangements -- the baron reportedly said that the $150,000 it cost him to fly the body home by special jet was "a bargain" -- so endeared him to Baron Thyssen that he instantly replaced Rappetti with Mr. Crispo. Within a few years, Mr. France reports, the baron had bought "an estimated 400 19th-century paintings from the Crispo Gallery, totaling more than $90 million in gross receipts." (He also maintains that Mr. Crispo and his staff "cleaned up" the provenances of the paintings, that is, attached phony documentation to disguise their true origins, not only to make Mr. Crispo seem like a discoverer but also to keep the baron from learning the names of -- and possibly patronizing -- the dealers who sent them on consignment.) According to Mr. France, the baron "knew Crispo used his name to open doors and to pry loose paintings," but he found the dealer "convenient" and "helpful."

Then Mr. Crispo's success began to sour. Even at its best, there always was something creepy about the gallery; rumors about its proprietor's increasing involvement with drugs and sexual intimidation did not help its reputation. Mr. Crispo, according to Mr. France, developed an addiction to cocaine. He cheated on taxes. He refused to pay bills. He surrounded himself with thuggish young men, taking on Mr. LeGeros, the troubled son of an upscale family, as his "bodyguard" and "executioner." Mr. LeGeros played bad cop to Mr. Crispo's good one, bullying hapless participants in the sexual dramas staged by the older man, the author writes. In one setup related by Mr. France, some youthful graffiti artists, bribed by money and drugs, helped Mr. Crispo and Mr. LeGeros torture a victim -- pseudonymously referred to as Paul Jeffries -- who had answered a pay telephone on the street outside a bar. On the line was Mr. Crispo, who seduced Jeffries up to his apartment for a coke fest.

Mr. Crispo was not charged in the case. Apart from Mr. LeGeros's testimony there was no corroborating evidence, so Mr. Crispo went scot-free. Subpoenaed for Mr. LeGeros's trial, he took the 5th and 14th Amendments, which protected him from being forced to testify against himself. However, soon afterward, he was sentenced to seven years in prison for income tax evasion -- he owed almost $4 million on income of $10 million -- a sentence later reduced to five years, of which he served three. And his luck held. In a later trial, in 1988, he was found not guilty -- although Mr. LeGeros had four years added to his prison sentence after pleading guilty to attempted kidnapping -- for the brutal treatment of Paul Jeffries.

Soon after his release from prison in 1989, a massive explosion leveled Mr. Crispo's cherished house in Southampton, where he had hung some of his most prized works of art. (Before his imprisonment, sales of part of his collection at Sotheby's and Christie's netted Mr. Crispo and his creditors nearly $20 million.) But -- wouldn't you know? -- in 1991 a jury awarded him $8.6 million from the Long Island Lighting Company -- which admitted that an accident in the form of a gas leak under the house had been the cause.

To say that Mr. France, a New York City journalist, is obsessed with the Crispo case is to put it mildly. But despite his lurid, tabloid presentation, his demon research goes a long way to persuade us that justice has miscarried, that Andrew Crispo should not be a free man today. Although, of course, Mr. Crispo has no voice here to convince us otherwise.