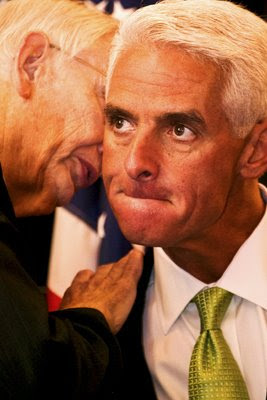 By Eric Barton
blogs.browardpalmbeach.com
May. 14 2009

These days, Charlie Crist is surely wanting headlines to mention his Senate bid, not talk about his ex-boyfriends. But all that surfaces on the new movie Outrage, which opens locally tomorrow at Gateway in Fort Lauderdale.

Outrage chronicles the many closeted gay Republicans who have surfaced over the years. It details how they've lived a double life -- soliciting gay sex in public bathrooms and trolling the Internet for random hook-ups. The film emphasizes what's relevant about outing this very personal part of someone's life: the fact that these men supported anti-gay legislation and talked of "family values" conservatism.

I watched an advance copy of Outrage last night (click here for a review), and Crist comes in as the third politician profiled. It begins with a couple right-winged quotes from him. "I'm a consistent conservative," he tells a newscaster. "Marriage is a sacred relationship between a man and a woman," he said during gubernatorial debates. ...

http://blogs.browardpalmbeach.com/juice/2009/05/outrage_documentary_kirby_dick_charlie_crist_gay_bob_norman.php
Posted by Alex Constantine at 5:16 AM