Despite the Jury Decision, CU is not Backing off it's Charge that Ward Churchill Committed Academic Fraud 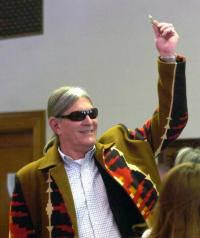 Churchill asks for his job back
By Felisa Cardona

" ... Chief Judge Larry J. Naves is expected to schedule a hearing to decide whether Churchill can return to campus or receive 'front pay' for future years he could have worked at CU. CU spokesman Ken McConnellogue said campus officials oppose Churchill's return to the classroom.

"'We are going to oppose his reinstatement to the campus for the same reasons that we dismissed him - because we believe he engaged in academic misconduct, the kind of conduct that we expel students for,' he said. ... "

Churchill stooped to perjury in his sworn testimony, the jury bought it. I recently wrote to CU's attorney to explain that one of Churchill's supporters on the stand was once fired for fraud (I know because I worked with this person at the time: Barbara Mann, now an accredited English teacher in Ohio, the witness in question, altered, behind my back, an article that I'd written for publication - her intent was to sully the reputation of a local progressive activist - and got caught at it. Mann was subsequently fired from the community development project we both worked for, and the "editing" of my text was the reason for her dismissal.), and to ask if CU will appeal. David Lane told me that there will be months of court filings before taking it to the appellate stage, but he stated flatly that CU will not rehire Churchill. CU isn't backing down. And if Churchill's shaggy-dog stories from the witness stand are exposed in pending defense motions, his name will soon be mud even among supporters who consider Churchill more than a Caucasian provocateur with a bag full of cheap tricks.