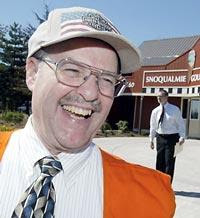 Greg Stephens, once considered something of a "GOP spoiler," was forced out of the Snohomish County Council race when he was exposed as a convicted pedophile. The local Republican Party is distancing itself from him.

Long before he decided to run for Snohomish County Council, Greg Stephens was involved in a divorce, called a camper home and pleaded guilty to taking indecent liberties with a 9-year-old girl.

His ex-wife said that psychiatrists treating him warned her not to leave him alone with children, according to court documents.

When Stephens, 60, announced Thursday that he was withdrawing from the race, he made no mention of the charges contained in King County Superior Court documents. He said he wanted to leave the campaign because of a badly broken wrist.

The Seattle Times on Friday reported that Stephens dropped out of the race Thursday after it contacted him about the criminal charges.

He did not return calls or an e-mail on Friday.

Under state election law, Stephens cannot technically withdraw from the race so his name will appear on the Aug. 18 primary ballot. The general election is Nov. 3.

Stephens was one of three Republicans challenging incumbent Dave Somers, a Democrat. The Snohomish County Republican Party had not endorsed Stephens, or the other Republicans, Steve Dana and Vern Little.

The local party distanced itself from Stephens on Friday.

“Most of the Republicans I've talked to don't know him,” party chairman James Kellett said.

King County Superior Court documents show that Stephens pleaded guilty in 1983 to indecent liberties, a felony. He was sentenced to five years of community supervision, which he completed in 1988, said Joseph Mitchell, a spokesman for the Washington State Department of Corrections. A judge also ordered Stephens to seek counseling, court documents said.

The case involved a 9-year-old girl living in north King County. After Stephens' arrest, King County authorities objected to his release because he was living in a camper on the back of a pickup truck.

In divorce papers from the early 1980s, before his arrest, Stephens' ex-wife swore out a statement that he was receiving psychiatric treatment related to sexual abuse of a child.

In a response, Stephens said he entered the counseling voluntarily to appease his wife. He said it was for “our marriage and the underlying marital problems.”

At one point, he said he “did a self-evaluation and sincerely felt that I did not need any further treatment.”

He said he was living out of his pickup for two years because of financial problems.

During an interview in early July, Stephens claimed he worked briefly as a sheriff's deputy in Los Angeles County before moving to Washington and working for 30 years as an ambulance driver. At the time of his injury, he said he was working as a hotel security officer.

For several years, Stephens has advocated forming a new city in the unincorporated Maltby area and has served on several government advisory boards.

He has never held political office, and in 2005 came in last in the County Council race against then-incumbent Jeff Sax. Somers won the race.

After that election, complaints that Stephens actually lived in King County prompted an investigation into his residency. He claimed his address was an uninhabitable house in Maltby.

The investigation found that he committed no crime. A judge later ruled he was able to run as a candidate in Snohomish County.

County elections manager Garth Fell said Friday that officials now are investigation whether Stephens' past felony conviction should have prevented him from running.
Posted by Alex Constantine at 7:11 PM