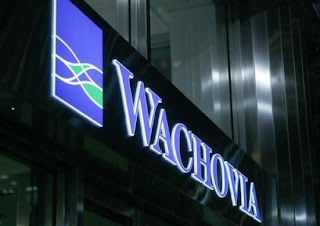 Wachovia has long held a reservation on my blacklist. Fair Finance Watch, among other corporate watchdog groups, maintains that the mortgage house "unfairly imposes higher rates on home loans to African-Americans than non-Hispanic whites and finances pawn shops and payday lenders known for charging high rates for short-term loans to low-income households." - AC/Source: MSNBC
http://www.msnbc.msn.com/id/12680868/from/RSS/
•••••••
" ... I love the notion of the Fed 'seizing banks.' It’s so banana republic ... " 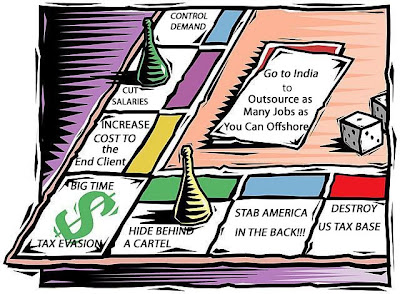 With the announcement of Citigroup’s purchase of the Wachovia Corporation, the Federal Deposit Insurance Corporation told us Monday morning of the latest bank to get whacked by the predatory mortgage market, as in what goes around comes around. But not to worry, folks, Citigroup will pay a buck a share, about $2.2 billion, in a brand new deal. How’s that for a buy?

The FDIC said that it would suck up the losses from Wachovia above $42 billion and receive $12 billion in preferred stock and warrants from Citigroup in exchange for assuming the risk. Of course, it iterated that “Wachovia, did not fail . . . rather it is to be acquired by Citigroup Inc on an open-bank basis,” as reported in the New York Times.

Citigroup will inherit most of Wachovia’s assets and liabilities, which include $400 billion in deposits on the black side and take on senior and subordinated debt of Wachovia on the red side. Wachovia Corp will go on owning the retail brokerage firm AG Edwards and the money management sidekick Evergreen (hopefully to live up to its name). ...

Wachovia was duly whomped by a 2006 buy of Golden West Financial [Golden West operates its branches as World Savings Bank], the California “lender” (the nice name for a kind of uptown loan-sharking), specializing in euphemistically named pay-option mortgages, more likely pay or go. The bank was also dealing with increasing losses on loans to home builders and commercial real estate developers (pop goes the building bubble weasel). Wachovia shelled out more money for acquiring the AG Edwards retail brokerage firm (which could probably collateralize the bad loans and sell them as securities or bonds), which turned out to be trouble, and led to Wachovia’s board booting out G. Kennedy Thompson as the bank’s good old boy chief executive.

The talks heated over the weekend with the parallel negotiations in the $700 billion Wall Street welfare rescue for the banking industry (Go to Jail for that one). This came just a few days before fed “regulators” seized and sold Washington Mutual (WaMu), the largest savings and loan bank in the country. I love the notion of the Fed “seizing banks.” It’s so banana republic, not the clothing chain either. This was one in a series of dice rolls to “reshape the financial landscape,” better known as the world’s largest Ponzi scheme.

As the credit crisis, which is really a debt crisis went south, consolidation, as finance analysts predicted for a long time, happened in no time. Of course, as our CEO George Bush told us, the pain will be felt on Main Street, Wall Street and K Street, at least -- maybe in the Congress as well, as Monday as they voted not to pass their bailout.

This weekend’s deal was brokered in architect Mies van der Rohe’s Seagram’s building, where this editor once worked in the ad biz, wincing at the fact that you couldn’t open a window to let some fresh air in. Yet it was Mies who famously said, “Less is more.” Apparently that lesson went unheeded in the banking community. Or it may be just learning it. And get this. Robert K. Steel (great Ayn Rand name), the president and CEO of Wachovia and a former top honcho at both Goldman Sachs and later the Treasury, landed in New York to handle the deal personally, along with David M. Carroll, chief deal maker for the bank. And then Citigroup and Wells Fargo (the alternate bidder) took their first look at Wachovia’s books. Arrrghhh!

Of course, regulators told them to move quickly. If you think about this muddle for a minute, you will want to find an open window. Top Fed officials in DC, New York, Richmond and San Francisco, also held weekend Monopoly games with all the banks involved. Top guns at the Federal Deposit Insurance Corp (FDIC) also got to roll the dice.

More, the Times tells us, the president of the Fed Reserve Bank of New York, Timothy F. Geithner, “personally reached out to executives involved in the process to assess the situation and spur it along.” Citigroup and Wells put the screws on Fed regulators to “seize” Wachovia so they could buy its assets and deposits, like JPMorgan did with WaMu -- or else set up a financial guarantee like “regulators” did when they stole (excuse me) acquired Bear Stearns.

Citigroup and Wells Fargo were shaky about sucking up Wachovia’s “giant loan portfolio,” stuffed like an enchilada with bad mortgages. Again, bankers had little time to weigh the risk. “Never enough time to do it right, always enough time to do it over,” as we used to say in the ad game, the mother of spin-industries.

Yet, it was Citigroup that saw the buy as a go-for-broke situation to boost their consumer banking position. With Wachovia, Citigroup would engulf and devour one of the leading bank operations (though you’d never tell by its wantonly unkempt books). This Citigroup considers will give it entrée to more “stable consumer deposits,” so it can count less on outside investors for funds. Citigroup depositors, caveat emptor (buyer beware).

Meanwhile, keep calling your senators, congressman, shamans, rabbis, reverends, and witch doctors to VOTE NO on the bailout, which undoubtedly will be brought up for another vote. That’s VOTE NO on the bailout. This offer cannot be repeated, especially after the savings and loan debacle, the junk bond debacle and the dot.com scam. A nation that’s already broke shouldn’t be digging an even deeper hole for future generations.
•••
Jerry Mazza is a freelance writer living in New York City, where the smell of sulphurous fumes are wafting up from Wall Street like 9/11’s. Reach him at gvmaz@verizon.net. Look for his new book, “State Of Shock: Poems from 9/11 on” at www.jerrymazza.com, Amazon or Barnesandnoble.com.

http://onlinejournal.com/artman/publish/article_3810.shtml
Posted by Alex Constantine at 10:43 AM