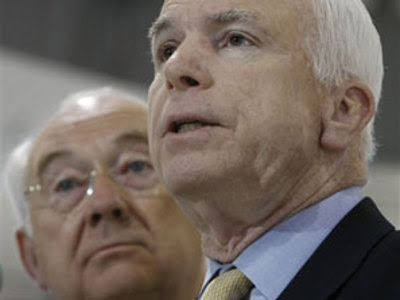 Yeah, Phil Gramm stepped down as McCain's economic advisor after his comment about Americans being whiners, and the recession being psychological.**

**The actual quote is “You’ve heard of mental depression; this is a mental recession.... We have sort of become a nation of whiners. You just hear this constant whining, complaining about a loss of competitiveness, America in decline.”

But you know full well that Gramm is still The Dollar Man for McCain. The fact that Gramm has a PhD in economics apparently lends him a presumption of respectability and has convinced McCain that Gramm must know something about the subject in which he got his Doctorate. But your degrees don't define you nearly as much as your values and perceptions do, and no degree can impart wisdom and objectivity. And who is Gramm?

I leave it to Molly Ivins to provide a long term view on the Gramm Man. From her "Goodbye to Phil Gramm and Dick Armey, the last of a bitter breed of Texas politician" (emphasis added to the lowlights):

Like Armey, Phil Gramm is fond of posing as a picked-upon outsider whenever he screws up. But Gramm has done far more damage to the public interest-and his record of hypocrisy is remarkable, even by Washington standards. Gramm has always posed as a right-wing populist, looking out for the little guy against the terrible Washington politicians who are wasting the hardworking taxpayer's dollar: His Everyman was Dicky Flatt, a printer in Mexia, Texas, and Gramm's supposed lodestar has been, "What would Dicky do?" In fact, Gramm has been an assiduous servant of large corporate interests, routinely supporting legislation that screwed the Dicky Flatts of the world. 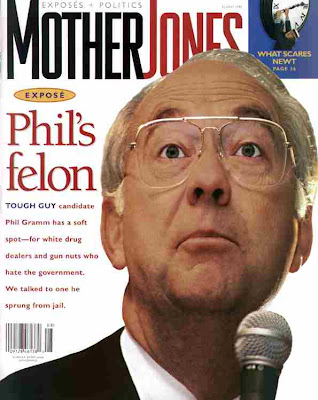 Gramm both looks like a snapping turtle and has the personality of one. When he ran for president in 1996 and finished fifth in Iowa, all the profiles written of him included the line "Even his friends don't like him." Self-righteous and strident, Gramm demonized his opponents and used bitter, polarizing rhetoric. During a Senate debate over Social Security, a member pointed out that the proposal under consideration would hurt 80-year-old retirees. "Most people don't have the luxury of living to be 80 years old," Gramm scoffed, "so it's hard for me to feel sorry for them." Well, there is that.

On another occasion, Gramm ridiculed a newspaper photo of poor people who were forced to cut corners to put food on the table. "Did you see the picture?" Gramm asked a crowd. "Here are these people who are skimping to avoid hunger and they are all fat!... We're the only nation in the world where all our poor people are fat." During the fight over health care reform, Gramm said, "We have to blow up this train and the rails and the trestle and kill everyone on board." When an elderly widow in Corsicana told him that cutting Medicare would make it more difficult for her to remain independent, Gramm said, "You haven't thought about a new husband, have you?"

When he first ran for Senate in 1984, Gramm's main attack ad focused on how his opponent, a young state senator, had received a check for $600 raised by a gay group at a male strip joint in San Antonio. He had not solicited the contribution and promptly returned it, but Gramm ran lurid ads about the gay strip show for months.

His tactics have not won him any friends among Texas politicians. Gramm is notorious for letting Texas congressmen do all the work of getting federal projects in their districts and then stepping up to claim credit when the project is approved. The noun for this is "Grammstanding," and it is now part of the political lexicon.

Gramm, the great crusader against government spending, has spent his entire life on the government tit. He was born at a military hospital, raised on his father's Army pay, went to private school at Georgia Military Academy on military insurance after his father died, paid for his college tuition with same, got a National Defense Fellowship to graduate school, taught at a state-supported school, and made generous use of his Senate expense account. In 1987, a Dallas developer named Jerry Stiles flew a construction crew to Maryland to work on Gramm's summer home. Stiles spent $117,000 on the project but was kind enough to bill Gramm only $63,433. When Stiles got in trouble for misusing funds from a savings and loan he owned, Gramm did him some "routine" favors with regulators. Stiles was later convicted on 11 counts of conspiracy and bribery.

As a member of the Senate Finance Committee and the recipient of enormous banking contributions, Gramm did an even bigger favor for the financial industry in 1999 when he sponsored the Financial Services Modernization Act allowing banks, securities firms, and insurance companies to combine. The bill weakened the Community Reinvestment Act, which requires banks to help meet the credit needs of low- and moderate-income neighborhoods. Gramm described community groups that use the CRA as "protection rackets" that extort funds from the poor, powerless banks. The bill is also a disaster for the privacy of bank customers and weakens regulatory supervision. As Gramm proudly declared, "You're not going to find a single bank, insurance company, or securities company that will say they were hurt financially by this bill."

To be fair, Gramm occasionally found it in his heart to assist the poor -- like the time he suggested that mothers on welfare would be better off working for $2.50 an hour. A more typical Gramm vote, though, came on an energy bill that benefited oil and gas companies at the expense of consumers. "There are winners and losers in every economic decision," Gramm said portentously. He was then getting more oil and gas money than any other member of the Senate. So much for Dicky Flatt.

Just the kind of guy I would want providing primary economic policy input at a time of real crisis in the country. The banks want to sell insurance and investment services? Sure, what could possibly go wrong there? 80 year olds have a hard time on their Social Security benefits? So? Did anybody tell them they had to live that long? Huh? Did they? Why does just writing this bring to my mind the voices of Dick Cheney and Sean Hannity?

Of course, McCain not only ditched the Gramm Man after this error of uttering private thoughts in public, he strongly disclaimed the sentiments voiced by Gramm, proclaiming that Gramm did not speak for him. So if you take that at face value, then this piece is kind of a waste of time. But isn't it odd how similar McCain's statement was at one of the Republican primary debates in January:

Even worse, to me, was McCain's answer to another question at that same debate:

Moderator: Senator McCain, are Americans better off than they were eight years ago?

McCain: I think you could argue that Americans overall are better off, because we have had a pretty good prosperous time, with low unemployment and low inflation and a lot of good things have happened. A lot of jobs have been created.

But let's have some straight talk. Things are tough right now. Americans are uncertain about this housing crisis. Americans are uncertain about the economy, as we see the stock market bounce up and down, but more importantly, the economy particularly in some parts of the country, state of Michigan, Governor Romney and I campaigned, not to my success, I might add, and other parts of the country are probably better off.

Moderator: It sounds like that we're not better off is what you're saying.

Moderator: It sounds like you're saying we're not better off.

McCain:I think we are better off overall if you look at the entire eight-year period, when you look at the millions of jobs that have been created, the improvement in the economy, et cetera.

That response bothers me a lot. This is January, 2008. Well before that it was known that both job creation and the rate of job loss were slowing down.
Even in January, he, especially as a powerful Senator and Presidential candidate, could have found out how bad this banking crisis was likely to get. Nor am I impressed by the fact that he phrased all his discussion of why things were tough in terms of people being "uncertain," which again harks back to the psychological component of hard times but doesn't address the economic facts creating the uncertainty.

And the "millions of jobs" that have been created? A number which was "millions short" of what was needed. Jobs which carried wages so low that the average real wage is now no higher than 8 years ago, meaning that a significant chunk of people with jobs are worse off now than they were then. As I pointed out in a response to a comment on the article about the slowing of both job creation and job loss:

This was all in the public record when McCain made his comments at the debate and certainly known when Gramm made the comments that cost him his position as McCain's advisor.