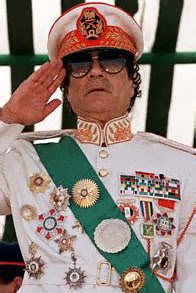 PARIS: The son of Libyan leader Moammar Gadhafi said a deal to buy military hardware from France was a key element of negotiations that led to the release of six medics detained in Libya, the daily Le Monde said Wednesday.

But President Nicolas Sarkozy said no armament deals were concluded with Libya. The Foreign Ministry refused to comment.

Seif al-Islam Gadhafi also was quoted by Le Monde as saying an agreement for France to intervene militarily to defend Libya from security threats had also been on the negotiating table, but he was not sure it had figured into the final deal.

Under an accord partially brokered by French first lady Cecilia Sarkozy and EU officials, Libya released the five Bulgarian nurses and a Palestinian doctor on July 24. The medics, who had spent 8 1/2 years in prison, faced life sentences on charges they deliberately infected hundreds of children with the AIDS virus — an allegation they denied.

French officials have provided few details about the accord, but Seif al-Islam Gadhafi claimed it included the sale of French Milan anti-tank missiles for an estimated €100 million (US$137 million) and a deal on the joint Franco-Libyan manufacture of military equipment, according to Le Monde. It also included an agreement to conduct joint military exercises, he was quoted as saying, adding it was Libya's first military deal with a Western nation.

Sarkozy replied with a brusque "no" when reporters asked on Wednesday if any armament deals were concluded with Libya. When pressed about any such agreement in exchange for the medical workers' freedom, he said simply "none."

David Martinon, his spokesman, in a fuller reply later, said: "There was no armaments contract signed during the visit of Nicolas Sarkozy to Libya."

Seif al-Islam Gadhafi — who heads the Gadhafi International Foundation for Charity Associations and was a key player in the negotiations — said the possibility of the security agreement had also been under discussion.

"But I'm not sure if that article was maintained in the (final) document," he was quoted as saying.

Libya — long considered a pariah state for its involvement in the 1988 bombing of Pan Am Flight 103 over Lockerbie, Scotland — has been attempting to end its isolation.

In 2003, it accepted responsibility for the Lockerbie bombing, which killed 270 people, and agreed to pay restitution to the victims' families. The Libyan leader also announced he was dismantling his nuclear weapons program, which led to the lifting of U.S. and European sanctions against the country.

The release of the medics removed the last major obstacle to Libya's rejoining the international community.

Sarkozy was quick to renew ties with the oil-rich nation, traveling to the capital, Tripoli, for talks with Moammar Gadhafi the day after the medics were returned to Bulgaria on a French presidential plane.

In the Le Monde interview, Seif al-Islam Gadhafi did not mention the planned desalination plant. He said that nuclear technology would allow Libya to export energy — possibly to Italy.