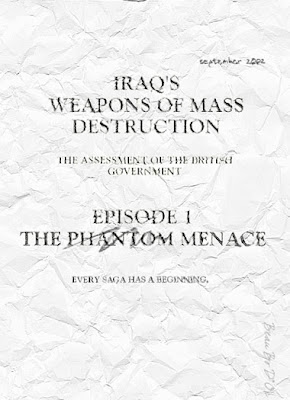 Secret emails and memos showing how the Iraq war dossier was "sexed-up" must be released by the Cabinet Office, The Independent has learnt.

Richard Thomas, the information commissioner, has told civil servants to release undisclosed material which could provide "evidence that the dossier was deliberately manipulated in order to present an exaggerated case for military action".

After repeated freedom of information requests, Mr Thomas says in a 20-page ruling given to The Independent that there is a clear public interest in seeing comments about drafts of the dossier between 11 and 16 September 2002, in the days before Alastair Campbell suggested changes. Mr Thomas adds that there is no national security justification for keeping these comments from politicians secret.

The Government's case for the war was set out in the dossier about Saddam Hussein's weapons capabilities, published on 24 September 2002 and overseen by the head of the Joint Intelligence Committee, Sir John Scarlett.

Mr Campbell suggested 11 changes to the draft, which were all adopted in the final week before publication, included changing how biological weapons "could be used" to "are capable of being used", and changing "may have" to "have", regarding the authority of Saddam's sons' to launch chemical or biological weapons. Tony Blair famously claimed in the document that Saddam could deploy weapons of mass destruction "within 45 minutes of an order to use them".

The prospect of a return to the debate over the dossier – which led to a furious row between the BBC and the Government, the death of Dr David Kelly and the subsequent Hutton Inquiry – will horrify ministers who hoped Tony Blair's departure from office last year had drawn a line under the affair.

Dr Kelly, a Ministry of Defence biological weapons inspector, committed suicide in Oxfordshire woodlands in July 2003 after finding himself at the centre of the WMD "sexing up" storm. The catalyst for the scandal was a report on Radio 4's Today programme by the journalist Andrew Gilligan, who had met Dr Kelly to discuss Alastair Campbell's role in the dossier.

Downing Street went on the hunt for the report's source, and Dr Kelly's name was mentioned in some reports before he apparently slit his wrists and took an overdose of prescription drugs.

In Lord Hutton's subsequent inquiry into Dr Kelly's death, a string of changes to the dossier by Mr Campbell and Jonathan Powell, Mr Blair's chief of staff, were made public. The new ruling by the information commissioner follows a three-year campaign by the journalist Chris Ames, who believes the Government is withholding key information about its case for the war.

In a passage that appears to confirm for the first time the existence of new, so-far-undisclosed material, Mr Thomas says: "Having considered the information which was withheld by the Cabinet Office, the commissioner is not satisfied that all of the comments on the draft dossier constituted information which engages the section 24 exemption [relating to national security]".

The commissioner points out that comments made by political figures – such as press officers in Downing Street – as opposed to intelligence officials, do not require protection on grounds of national security. "Specifically, he [the commissioner] does not consider that the comments arising from bodies other than the Defence Intelligence Staff, and some of the comments made by officials to the Defence Intelligence Staff relating solely to the drafting of the dossier, can be said to amount to information whose exemption is required for the purpose of safeguarding national security."

The letter was signed on behalf of the commissioner by his deputy, Graham Smith. The Cabinet Office now has 35 days either to publish the information requested by Mr Ames, or to appeal.

Mr Ames said: "The commissioner has laid bare the Government's farcical cover-up, which included shamelessly playing the national security card. He has also given a strong hint that the Government has concealed evidence of sexing-up to save political embarrassment."

Iraq's Weapons of Mass Destruction: The Assessment of the British Government, was published on 24 September 2002 to coincide with the return of Parliament after a summer in which war in Iraq was edging closer. Tony Blair used the dossier to bolster his case for invasion. John Scarlett oversaw the compilation of the dossier, and allowed changes to be inserted by Alastair Campbell and others. The row between the Government and the BBC was ignited when Mr Campbell reacted furiously to a report by Andrew Gilligan on the Today programme implying that he had inserted a key claim in the dossier stating weapons could be launched in 45 minutes. Mr Gilligan's report was said to have been based on conversations with intelligence sources, one of whom appeared to be Dr Kelly.