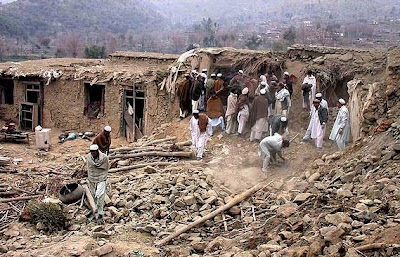 Three men have been arrested after allegedly providing "wrong information"
which led to the deaths of scores of civilians in a US air raid in western Afghanistan.

More than 90 people, mostly women and children, were killed in the village of Azizabad in western Herat's Shindand district on August 22, according to the Afghan government.

Police began an investigation into the incident on September 4 after villagers said US-led forces in Afghanistan had been fed false information about the presence of Taliban members in Azizabad following a tribal dispute, interior ministry officials said.

A statement said: "After examining all the police reports and direct claims made by people in the area, three suspects who are said to be key people in giving false information regarding the bombardment of Azizabad, have been arrested in a police operation."

The three were on a list of people provided to Hamid Karzai, the president, by villagers.

Karzai, who has already sacked two senior army commanders over the incident, visited relatives of the victims earlier this month and pledged to punish those responsible.

Locals told Al Jazeera that the air raid hit a memorial service at a compound belonging to Reza Khan, a tribal leader who had been in dispute with Nader Tawakal, another local leader.

"We were holding a prayer ceremony when the bombs started to fall ... it was heavy bombardment. The whole village was on fire and about 90 were killed," Abdul Rasheed, the brother of one of the dead, said.

Karzai told villagers that those responsible would be punished [EPA]
Villagers have denied that the gathering was a meeting of the Taliban, which has been fighting Afghan and international forces since being forced from power in 2001.

They said that Khan, who died in the raid, was a businessman with security contracts at a nearby US base.

"But instead of surrounding the village they just started bombing."

Nader was not among those arrested on Friday.

The US military maintains that between 30 and 35 Taliban fighters were killed, but has agreed to reopen the investigation after a mobile phone video emerged showing bodies of people said to have been killed in the attack.

It says the original investigation found that a senior Taliban commander was among the dead in the air raid, which was called in after Afghan army US-led ground forces came under intense fire.

One resident of Azizabad said that US forces raided his house after the bombing and demanded to be shown the bodies of the dead Taliban fighters.

"I said there were no Taliban here," he told Al Jazeera. "I saw their facial expressions when they realised that civilians had been killed."

More than 500 civilians have been killed during military operations by foreign and Afghan forces so far this year, according to the Afghan government and some aid groups.

Daoud Sultanzoy, an Afghan MP, said that such incidents were destroying people's faith in the Afghan government and international forces in the country.

"The weak Afghan government and weak leadership is trying to take advantage of this and trying to deflect attention from their own problems that are the root cause of these kind of things," he told Al Jazeera.