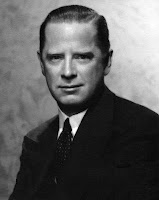 “By the 1950s, however, Pegler was showing some nostalgia for the Third Reich. His proposal for 'smashing' the AF of L and the CIO was for the state to take them over. 'Yes, that would be fascism,” he wrote. “But I, who detest fascism, see advantages in such fascism.' ... ”

Andrew Sullivan links to Robert Kennedy who repeats the smear that columnist Westbrook Pegler, a writer Sarah Palin quoted in her acceptance speech, was an “avowed racist” and a “fascist writer.” Neither is really true. Yes, Pegler went batty with old age and wrote some odious stuff (apparently about RFK) but he was also the first columnist to win a Pulitzer Prize for reporting (on union corruption, which is one reason the left hates him so) and, as I’ve noted before, wrote about the plight of European Jews as early as 1936. He was avowed anti-Nazi, actually, not an avowed fascist. His strident columns assailing the New Deal seem to be the main reason he elicits such contempt from certain folks. He was, without a doubt, controversial and went off the deep end, but to tag any nefarious significance to Sarah Palin quoting him in regards small towns, is a stretch.

[CIA "Mockingbird" propagandist] Bill Buckley wrote about him in the New Yorker here.

An anti-semitic apologist. How original.

“By the 1950s, however, Pegler was showing some nostalgia for the Third Reich. His proposal for “smashing” the AF of L and the CIO was for the state to take them over. “Yes, that would be fascism,” he wrote. “But I, who detest fascism, see advantages in such fascism.”

I think you only read Buckley’s article in forming the opinion expressed in your post, or do you have other references on Pegler?

Methinks Harsanyi doth protest too much. Anyone researching Pegler will find many examples of racism and anti-semitism, as well as direct wishes for RFK’s assassination that would have him imprisoned today, and should have then. While his writing and career were not all the same, any more than any other writer, in sum he was a repugnant individual, and the choice of his writings for a quotation is reason for repulsion.

“When fascism comes to America it will be wrapped in the flag and carrying a cross.” - Sinclair Lewis

“I told Congress thanks but no thanks for that bridge to nowhere. If the state wanted to build a bridge we would built it ourselves.”

Judge for yourself what she said:

Sarah Palin is a liar. That is all you need to know about her.

Pegler was, in fact, anti-Semitic and his writings plainly show it. He was a scurrilous and libelous columnist and he lost a highly publicized libel trial because of columns that he wrote, and Hearst newpapers ran, about war correspondent Quintin Reynolds. (Read an account of the trial in “My Life In Court,” by Louis Nizer.) Pegler was publicly humiliated as a result and never regained his reputation.

The threat of violent protests at the Democratic National Convention was a topic of endless discussion here in Denver leading up to the DNC. There were city council meetings, lawsuits, hand wringing and secret detentions centers (otherwise known as Gitmo on the Platte). Yet, up to this point, it seems, all of it was an overreaction to a clever public relations campaign waged by a handful of “anarchist” groups.

Protestors have numbered in the hundreds — at the largest demonstrations — rather than the anticipated tens of thousands. And protestors have generally been peaceful and predictably incoherent.

Good fortune for me, though. On my way to the Pepsi Center — a compound protestors can’t see much less yell at — I happen to run into some real live Communists. They had temporarily shut down the shuttle on 16th street (the pedestrian tourist mall downtown) until cops showed up on horseback to lead them away from the fragile psyches of the delegates. This harmless demonstration was indicative of others, with a potpourri of causes to choose from: Cures not Wars, free the Cuban Five and don’t lay a finger on Mumia Abu-Jamal (”Fire in the Sky if Mumia dies”.) ...