Matthew DePalma of Flint, Mich., has been charged with illegally possessing Molotov cocktails. He was arrested Saturday. 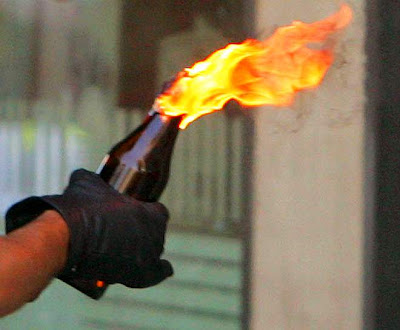 A 23-year-old Michigan man allegedly plotted to set off a homemade bomb in the tunnels near the Xcel Energy Center, hoping it would cause a power outage and lead officials to call off the Republican National Convention, according to charges filed in federal court in Minneapolis.

Matthew B. DePalma of Flint, Mich., has been charged with illegally possessing Molotov cocktails. He was arrested Saturday at an apartment in south Minneapolis and made his first court appearance Tuesday, according to a statement released Wednesday by the U.S. Attorney's office. His next hearing is scheduled for Friday.

According to the news release, DePalma spent about 90 minutes at the Hennepin County Library on Aug. 18 researching recipes for homemade bombs. He bought the supplies for Molotov cocktails on Aug. 21 and 22.

The news release said that according to an FBI affidavit, DePalma said that if he could bomb the Xcel Center on Sept. 1, "they might call off the convention."

He added that a 'power outage would say a lot' and that it was his 'main purpose.' DePalma also said that he would like to bomb the Xcel Energy Center on Sept. 4 so that the convention would 'end with a bang,' according to the release.

DePalma first came to the attention of the FBI when he attended the CrimeThinc Conference near Waldo, Wis., in July. He allegedly told people he planned to travel to Minnesota to attend the convention. He also is alleged to have said he wanted to "make some bombs" and "blow up" things during the RNC.

The affidavit said DePalma talked about making Molotov cocktails with "a FBI source" and described in detail the ingredients needed to make the flammable liquid more viscous so it would stick to a target and burn longer and hotter than an ordinary gasoline-based Molotov cocktail.