LIFE AND DEATH IN THE THIRD REICH 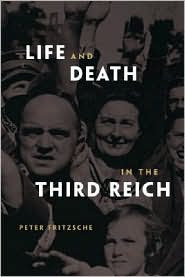 Life and Death in the Third Reich, by Peter Fritzsche

On January 30, 1933, hearing about the celebrations for Hitler’s assumption of power, Erich Ebermayer remarked bitterly in his diary, “We are the losers, definitely the losers.” Learning of the Nuremberg Laws in 1935, which made Jews non-citizens, he raged, “hate is sown a million-fold.” Yet in March 1938, he wept for joy at the Anschluss with Austria: “Not to want it just because it has been achieved by Hitler would be folly.”

In a masterful work, Peter Fritzsche deciphers the puzzle of Nazism’s ideological grip. Its basic appeal lay in the Volksgemeinschaft—a “people’s community” that appealed to Germans to be part of a great project to redress the wrongs of the Versailles treaty, make the country strong and vital, and rid the body politic of unhealthy elements. The goal was to create a new national and racial self-consciousness among Germans. For Germany to live, others—especially Jews—had to die. Diaries and letters reveal Germans’ fears, desires, and reservations, while showing how Nazi concepts saturated everyday life. Fritzsche examines the efforts of Germans to adjust to new racial identities, to believe in the necessity of war, to accept the dynamic of unconditional destruction—in short, to become Nazis.

Powerful and provocative, Life and Death in the Third Reich is a chilling portrait of how ideology takes hold.

At the beginning of Ernst Junger’s Auf der Marmorklippen (“Off the Marble Cliffs”), there is a touching passage: “You all know the wild grief that besets us when we remember times of happiness. How far beyond recall they are, and we are severed from them by something more pitiless than leagues and miles.”

Junger wrote in 1939, when no German could mistake (or simply ignore) the changes taking place in the country. Hitler came to power in 1933; the Nuremberg race laws were passed in 1935; the Anschluss took place in 1938. A dark new age was dawning, and Peter Fritzsche, the author of the definitive Germans into Nazis, probes his subject further in this brief, brutally intense new book, Life and Death in the Third Reich.

Fritzsche investigates the myriad ways Hitler’s Nazi Party attempted to impose the myth of its own necessity on the German people – and the correspondingly large number of ways the German people accommodated, accepted, and maybe even came to believe that myth (at the center of the book’s dust jacket is a kind-faced matronly woman who could be anybody’s friendly mother – only her right arm is raised, as are the right arms of all around her, in an enthusiastic Sieg Heil salute). It’s murky, disturbing territory, and Fritzsche, in chilling detail after detail, doesn’t flinch from it:

It was important, Elizabeth Sextrohs wrote [to her former friend Paula Tobias, a Jewish physician who’d asked her why she, Paula, no longer “counted” as a German] in September 1933, trying to be “as clear as possible,” to push back the “preponderant influence of Jewry in all aspects of German life.” True, it was “hard and tragic” for individuals to suffer. Elizabeth Gebensleben also weighed good and bad, but defended Jewish measures because they promised to restore German sovereignty. Antisemitism was tried on, and it often fitted.

Everywhere in Life and Death in the Third Reich, Fritzsche is energetic and assured, but he’s at his most affecting in this book when he’s writing about the Reich’s primary victims, the Jews:

The annihilation of Jewish communities was accompanied by the destruction of photographs, letters, and diaries – the private papers of deportees fueled a constant fire in Austerlitz, a satellite camp of Drancy (near Paris) where Jewish prisoners sorted through stolen goods – and thus the destruction of evidence of adjustment, attempts to escape or to resist the invaders, of the documentation of crimes, and of the comfort offered to friends and family.

Fritzsche has devoted his professional life to studying the horrible phenomenon of Nazism – how it came about, how it was able to flourish, how it exacted all the prices it did in death, in flesh, and in belief. It’s an unsavory subject, but he’s a master of it, and Life and Death in the Third Reich is his best work to date.