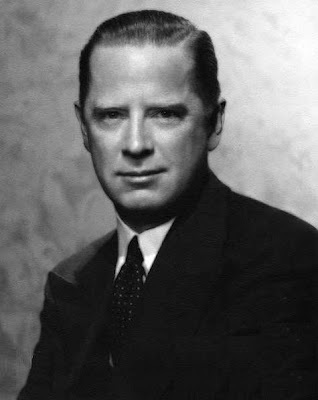 " ... In her convention speech ... Sarah Palin quoted an unidentified “writer” who extolled the virtues of small-town America: “We grow good people in our small towns, with honesty and sincerity and dignity.” (9/3/08) The unidentified writer was Westbrook Pegler (1894-1969), the ultraconservative newspaper columnist whose widely syndicated columns (at its peak, 200 newspapers and 12 million readers) targeted the New Deal establishment, labor leaders, intellectuals, homosexuals, Jews, and poets. ... "

Among the trite bromides delivered by Sarah Palin to the Republican National Convention was this: "We grow good people in our small towns, with honest and sincerity and dignity." Wow, these sure are powerful words, certainly not the verbiage of ordinary people or even ordinary speech writers. Palin certainly didn't write her speech, and even her distinctly dismal assembly of words in her ABC interview with Charles Gibson were probably not hers. Apropos the wisdom about small towns, her staff also did not trust themselves to do a sentence approximating the thought. So they went to... well, not a treasury of great quotations. It is, after all, a rather banal thought, banally expressed. They went to Westbrook Pegler.

You have to be pretty old to know that Pegler would be a treasure house of right-wing populist jargon. The fact is--and I've been checking this all day--no one under 65 with whom I spoke had the slightest idea who he was. So who, then, would know to breeze through the writing of Westbrook Pegler, of all people, in search of what is, after all, just a cliche? Surely only someone knowledgeable (and sympathetic to?) native American fascism.

There were many native American fascists around during the thirties: Father Coughlin, Senator Bilbo, Charles Linndbergh, just to mention a few. And, of course, Pegler himself. A popular journalist, he was syndicated by the Hearst chain, which in those days shared the kind of patriotism articulated by fascists. I knew Pegler as a child from my mother's curses, although she did not read the Journal American which was the Hearst outlet in New York. He was also published by The Washington Post. (For liberals and for Jews "Pegler" was a symbol of everything truly hateful, a not inappropriate approximation.) Pegler was so bad that, when already in his dotage, even the John Birch Society refused to be embarrassed by his writing and pushed him out the door.

Some of you may be thinking that what I have written here is hyperbole. So comes to the rescue Sahil Mahtani, one of the new crop of reporter-researchers at TNR, with an a la carte menu of quotations from the wisdom of Westbrook Pegler--ugly stuff, truly ugly:

In her convention speech a fortnight ago, Republican vice-presidential nominee Sarah Palin quoted an unidentified “writer” who extolled the virtues of small-town America: “We grow good people in our small towns, with honesty and sincerity and dignity.” (9/3/08) The unidentified writer was Westbrook Pegler (1894-1969), the ultraconservative newspaper columnist whose widely syndicated columns (at its peak, 200 newspapers and 12 million readers) targeted the New Deal establishment, labor leaders, intellectuals, homosexuals, Jews, and poets.

He wished in 1965 that “some white patriot of the Southern tier will spatter his spoonful of brains in public premises before the snow flies.” (J. Sharlet, “Paradise Shot to Hell: The Westbrook Pegler Story”, in Boob Jubilee, Ed. T. Frank & D. Mulcahey, W.W. Norton & Company, 2003, p. 358)

On the Jewish community:

Jews, he said, could not be the victims of persecution because persecution “connotes injustice…They are, instead, enduring retaliation, or punishment.” (D. Levitas, The Terrorist Next Door: The Militia Movement and the Radical Right, Macmillan, 2002, p. 71.)

He advanced the theory that American Jews of Eastern European descent were “instinctively sympathetic to Communism, however outwardly respectable they appeared.” (The New York Times, Obituary: “Free-Swinging Critic,” June 25, 1969, p. 43).

He had a habit of calling Jews “geese” because they, in his words, hiss when they talk, gulp down everything before them, and foul everything in their wake. (Diane McWhorter, “Revisiting the controversial career of Westbrook Pegler,” Slate, March 4 2004).

March 12 1945; In response to the Fair Employment Practices bill of New York State, which forbade Jews and other minorities from being restricted by quota in New York City medical establishments, Pegler attacked the new law as “pernicious heresy against the ancient privilege of human beings to hate.” (R. Kahn, The Era, 1947-1957, University of Nebraska Press, 2002, p. 44)

On the Civil Rights movement:

In 1963, less than 3 months after Martin Luther King Jr., delivered his famous “I Have a Dream Speech,” he wrote in a column, “[It is] clearly the bounden duty of all intelligent Americans to proclaim and practice bigotry.” (D. Levitas, The Terrorist Next Door: The Militia Movement and the Radical Right, Macmillan, 2002, p. 71)

In 1936, he wrote his famous lines, “I am a member of the rabble in good standing.” Yet that column was written in praise of a California lynch mob that killed two (white) men charged with a kidnapping-murder. (Diane McWhorter, “Revisiting the controversial career of Westbrook Pegler,” Slate, March 4 2004).

On the labor movement:

He once exhorted citizens to join strikebreakers “in the praiseworthy pastime of batting the brains out of pickets.” (J. Sharlet, “Paradise Shot to Hell: The Westbrook Pegler Story”, in Boob Jubilee, Ed. T. Frank & D. Mulcahey, W.W. Norton & Company, 2003, p. 358)

In the spring of 1950, piling on the McCarthy era attacks on the state department, Pegler attacked the State Department for being too friendly to homosexuals. Five of these columns were addressed to Dean Acheson, offering suggestions for changes to make the department reflect “the distinctive spirit and character of so many of the personnel.” He suggested Acheson rename the street adjoining departmental headquarters Grimm Street after the author of the fairy tales; that he rename the smoking room the “Fag room”; and that he replace the standard handshake greeting with a curtsy and the standard mode of address from “your Excellency” to “precious.” Courses in interior decorating, he mused, might provide better preparation for entry into the foreign service than history or political science.” (D. K. Johnson, The Lavender Scare, The University of Chicago Press, 2004, 68-69, quoting W. Pegler, Washington Times-Herald, March 31, 1950, 14).

“How could [Truman] help it if parties
both unusual and queer
Got into the State Department
which true patriots hold dear?
To hear the dastards tell it
they are true to Uncle Joey
And call each other female
names like Bessie, Maud, and Chloe.
And write each other poetry
and confidential notes so tender
Lke they was not he-men at all
but belonged to the opposing gender.”
(from D. K. Johnson, The Lavender Scare, The University of Chicago Press, 2004, 65)

He wrote that “It [was] regrettable that Giuseppe Zangara hit the wrong man when he shot at Roosevelt in Miami.” (W. E. Leuchtenburg, The FDR Years, Columbia University Press, 1997, p. 316).

On the WWII Japanese Internment:

Hey, not a bad dude!

Great post! I read the Huffington Post piece by Robert F. Kennedy Jr., which was too short to be useful, so I jumped over to the Wikipedia entry. I could tell the wiki entry had been white washed (no pun intended) to the point of ridiculousness. The wiki entry comported the New Deal with Fascism. Then it tried to support the idea that Pegler fought Fascism by opposing the New Deal. It was kind of Orwellian, now that I think about it. But I couldn't get a feel for how far out this Westbrook Pegler was until I read your blog. I don't think I hear of Pegler before today. I vague remember hearing about someone being through out of the John Birch society for being to anti-semitic, but the name did stick with me.