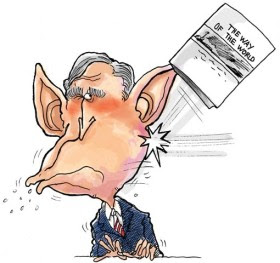 US President George W. Bush skipped the Republican convention last week, and sent a brief video message of support for the Republican presidential nominee John McCain. The convention offered Bush, whom the New York Times described as "the most unpopular president in recent history, a chance to revel, though remotely, in the kind of affection he rarely gets these days."

Bush must also be relieved that with media attention focused on the presidential race, he seems to have weathered the storm raised last month by yet another book accusing his administration of fabrication of evidence to justify the Iraq war.

In his new book The Way of the World, Pulitzer-Prize reporter Ron Suskind makes two accusations against the Bush administration. First, that the Bush administration received credible information from the British intelligence (who were informed by Iraq's intelligence chief Tahir Habbush) that Saddam Hussain had no weapons of mass destruction. Bush, and especially Dick Cheney and his neo-conservative entourage dismissed the information because they were intent on waging war.

Suskind reports that after the invasion of Iraq and the confirmation that Habbush was telling the truth, the Americans made a secret arrangement with him, hid him in Jordan and paid him $5 million.

Second, when it became clear after the invasion that there were no weapons of mass destruction in Iraq, the Bush administration, under pressure to justify the war decision, ordered the CIA to fabricate evidence in the form of a letter purportedly written by Habbush, and backdated to 2001.

The letter is addressed to Saddam Hussein and in which Habbush purportedly writes that Mohammad Atta, the alleged mastermind of the September 11 attacks, had visited Iraq and "displayed extraordinary effort" and that he would be "responsible for attacking the targets we have agreed to destroy".

The forged letter could thus be used as 'evidence' of the link between Saddam Hussein and the September 11 attacks, a link which Bush and Cheney deceivingly claimed justified the war.

Conveniently, the forged letter also mentions that Iraq is receiving via Libya and Syria "a shipment from Niger," a clear allusion to uranium which Bush falsely claimed in his State of the Union address of January 2003 that Saddam Hussain intended to use to develop nuclear weapons.

A key figure in this daring and illegal deception of the American people is Iraqi politician Eyad Allawi, who was installed by the Americans as the first interim prime minister of Iraq following the invasion. While Ahmad Challabi was working with the Pentagon and feeding the American military disinformation about the alleged existence of Iraqi weapons of mass destruction, Allawi was working for the CIA, which funded his opposition to and plotting against Saddam Hussain, and prepared him for leadership position in Iraq.

It was Allawi who passed on the forged letter to the British daily The Telegraph's Con Coughlin, a vocal supporter of the war, who published it in the front page on December 14, 2003, under the title: "Terrorist Behind September 11 Strike was Trained by Saddam"

The Telegraph story was picked up by William Safire, another vocal supporter of the war, in the New York Times issue of December 15, 2003 and was disseminated across the globe by media outlets and by supporters of the war.

But it was not long before the forgery was discovered. A Newsweek investigation concluded that the letter "is probably a fabrication that is contradicted by US law-enforcement records showing Atta was staying at cheap motels and apartments in the United States" at the time the forged letter claims he visited Baghdad.

Who ordered and who carried out the forgery was not established until Ron Suskind's claim last month that the letter was ordered by the Bush White House and the assignment carried out by the CIA.

An article in the Washington Post by Dana Priest and Robin Wright entitled "Iraq Spy Service Planned by US To Stem Attacks" stated:

"Badran and Eyad Alawi, leader of the INA, are spending much of this week at CIA headquarters in Langley... Both men have worked closely with the CIA over the past decade in unsuccessful efforts to incite coups against Saddam Hussain." (reproduced in Intelligence: December 2003 Archives).

The Post article was published on December 11, 2003. Allawi then was at the CIA headquarters on or about December 11. The CIA could have given the forged letter to Allawi on December 11 or earlier; Allawi passes it on to Coughlin on the 12th or the 13th, and Coughlin publishes it in the Telegraph on the 14th.

This possibility strengthens Ron Suskind's claim that the CIA was the source of fabrication.

Philip Giraldi, however, writes in the American Conservative that an "extremely reliable and well placed source in the intelligence community has informed me that Ron Suskind's revelation... is correct but that a number of details are wrong." He states that it was "Dick Cheney, who was behind the forgery," and that because Cheney mistrusted the CIA, he "went to Doug Feith's Office of Special Plans [at the Pentagon] and asked them to do the job. Unlike the Agency, the Pentagon had no restrictions on it regarding the production of false information to mislead the public... ".

This scenario is also plausible considering how Feith, a hawkish supporter of the war and of extreme right-wing Zionist politics, discarded intelligence from the CIA, carried out his own intelligence with distortions and fabrications, and passed it on to Cheney.

In either case, this is yet another example of the Bush administration's unedifying record of belligerence, deception and half-truths, and reckless disregard for the American democratic values.

If this were correct, should not Jordan investigate, and if the information is accurate - freeze the assets, indict Habbush and place the U.S. on a list of terror? Is this too much idealism to ask? 5pillar.wordpress.com