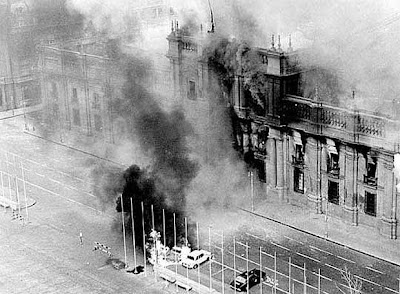 On the eve of the thirty-fifth anniversary of the military coup in Chile, (September 11, 1973) the National Security Archive based in Washington published for the first time formerly secret transcripts of Henry Kissinger’s telephone conversations that set in motion a massive US effort to overthrow the newly-elected socialist government of Salvador Allendé.

“We will not let Chile go down the drain” Kissinger told CIA director Richard Helms in one phone call. “I am with you,” the September 12, 1970 transcript records Helms responding.

The telephone call transcripts—known as ‘telcons’—include previously-unreported conversations between Kissinger and President Richard Nixon and Secretary of State William Rogers. Just eight days after Allende's election, Kissinger informed the president that the State Department had recommended an approach to “see what we can work out [with Allende].” Nixon responded by instructing Kissinger: “Don’t let them do it”

After Nixon spoke directly to Rogers, Kissinger recorded a conversation in which the Secretary of State agreed that “we ought, as you say, to cold-bloodedly decide what to do and then do it” but warned it should be done “discreetly so that it doesn’t backfire.” Secretary Rogers predicted that “after all we have said about elections, if the first time a Communist wins the U.S. tries to prevent the constitutional process from coming into play we will look very bad.”

The telcons also reveal that just nine weeks before the Chilean military, led by General Augusto Pinochet and supported by the CIA, overthrew the Allende government on September 11, 1973, Nixon called Kissinger on July 4 to say “I think that Chilean guy might have some problems.” “Yes, I think he’s definitely in difficulties,” Kissinger responded. Nixon then blamed CIA director Helms and former U.S. Ambassador Edward Korry for failing to block Allende’s inauguration three years earlier. “They screwed it up,” the President declared.

Although Kissinger never intended the public to know about these conversations, observed Peter Kornbluh, who directs the National Security Archive’s Chile Documentation Project, he “bestowed on history a gift that keeps on giving by secretly taping and transcribing his phone calls.” The transcripts, Kornbluh noted, provide historians with the ability to “eavesdrop on the most candid conversations of the highest and most powerful U.S. officials as they plotted covert intervention against a democratically-elected government.”

Later Secretary of State Kissinger began secretly taping all his incoming and outgoing phone conversations when he became national security advisor in 1969; his secretaries transcribed the calls from audio tapes that were later destroyed. When Kissinger left office in January 1977, he took more than 30,000 pages of the transcripts, claiming they were “personal papers,” and used them, selectively, to write his memoirs.

In 1999, the National Security Archive initiated legal proceedings to force Kissinger to return these records to the US government so they could be subject to the freedom of information act and declassification. At the request of Archive senior analyst William Burr, telcons on foreign policy crises from the early 1970s, including these four previously-unknown conversations on Chile, were recently declassified by the Nixon Presidential library.

The National Security Archive is an independent non-governmental research institute and library located at The George Washington University, Washington DC. The Archive collects and publishes declassified documents obtained through the Freedom of Information Act. The Archive serves as a repository of US government records on a wide range of topics pertaining to the national security, foreign, intelligence, and economic policies of the United States.