American Beauties: Palin Belonged to Secessionist Alaska Party and Her Daughter was Knocked Up by a Redneck who Wants OUT 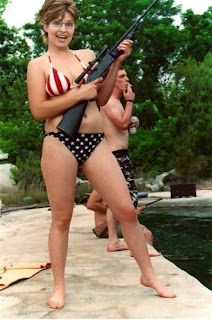 ... The revelation that Palin was a member of the secessionist Alaskan Independence party motto - "Alaska First" - sits awkwardly with McCain's campaign slogan, "Country First" and will be controversial in a country whose oath of allegiance includes the phrase "one nation, indivisible". The AIP believes that the 1958 vote which led to the state joining the Union was corrupt and wants a re-run, with the aim of eventual independence. Party officials said yesterday that Palin had attended at least one convention before leaving in 1996 to join the Republicans. The McCain camp yesterday insisted she had been a registered Republican since 1982. ...

... The father was later named in media reports as Levi Johnston, 18. The campaign team said it had gone public to end rumours that Palin's most recent child had in fact been Bristol's. In a Myspace entry, which has now been blocked, Johnston describes himself a "fuckin' redneck" and says he is in a relationship and "doesn't want kids". ...