Op-Ed: New Meadowlands Stadium to Be Named for Company With Nazi Connections?

Also see: "The Jets and Giants and Nazi Collaborators" 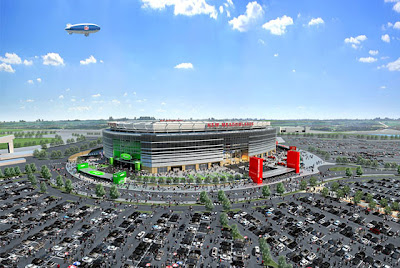 The fact that sports stadiums are branded with corporate sponsorships isn’t really a hot topic anymore. At this point, all fans really ask is that the company buying the rights try not to change its name every three weeks, and, if at all possible, maybe not have any deep historic connections to Nazi Germany. Fans are easy to please like that.

Unfortunately, the Giants and Jets don't seem to have gotten the memo about that second one. According to the Times, they’re negotiating to possibly sell the naming rights for their new Meadowlands stadium to Allianz, “a Munich-based insurer and financial services company with disturbing connections to Nazi Germany.”

What connections, you might ask? Explains Richard Sandomir in the Times:

Allianz insured facilities and personnel at concentration camps like Auschwitz and Dachau. Kurt Schmitt, its chief executive in the 1930s, served as Hitler’s second economics minister and can be seen in a photograph from a rally wearing an SS-Oberführer’s uniform and delivering the Nazi salute with Hitler standing in front of him.

Like other insurers in Germany at the time, Allianz followed anti-Semitic policies by terminating or refusing to pay off the life insurance policies of Jews, and sent cash that was due beneficiaries and survivors to the Nazis.

It also became the insurer of Jewish valuables taken by the Nazis.

Now, in fairness, Allianz has paid more than $12 million through the International Commission on Holocaust Era Insurance Claims, but still: a Nazi insurer! It probably goes without saying that this is a pretty bad idea, but we will say this: If Allianz does buy the rights, that stadium name won't change for a looong time. After all, if the company didn't bother to change its name after that whole being-involved-in-the-Holocaust business, it never will.

http://nymag.com/daily/intel/2008/09/new_meadowlands_stadium_to_be.html
Posted by Alex Constantine at 5:54 AM