Federal Agent who Penetrated Hells Angels "Fears for His Life" 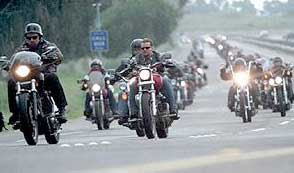 " ... The Hells Angels were originally formed by former WWII/Korean War and Vietnam War vets ( a high % CIA AIr America pilots/paratroopers/international drug and weapons smugglers). They named themselves Hells Angels because it is a term that reaches all the way back to elite WWI mercenary paratroopers, the 'for hire' covert operations assassins and terrorists known as Hells Angels who carried out illegal civilian kidnappings, interrogations, tortures, assassinations, and numerous terrorist atrocities on behalf of the U.S. government. Howard Hughes made the film Hells Angels about WWI-era fighter squadrons and named it after them. The Hells Angels have always been a conduit for the street drugs ...
http://www.unexplained-mysteries.com/forum/lofiversion/index.php/t86970.html
••••••••••••••••
"With his undercover work done and his real identity as a law enforcement agent exposed, Dobyns says the Hells Angels and other gangs enlisted by it came after him, issuing death threats. Dobyns claims that the ATF -- rather than protecting him -- abandoned him. ... "

• The ATF says it is reviewing Dobyns' case

MESA, Arizona (CNN) -- For nearly two years, Jay Dobyns led a double life. He rode alongside the Hells Angels, becoming a member of one of the nation's most feared criminal gangs. But at the same time, he was working as a federal agent in an effort to bring the Hells Angels down.

Jay Dobyns works for the Bureau of Alcohol, Tobacco and Firearms, the federal agency responsible for enforcing the nation's gun laws. His deep undercover work with the Hells Angels from 2001-2003 ultimately helped bring the indictment and trial of 16 gang members and their associates.

As a result, Dobyns was awarded a top cop award by the National Association of Police Organizations. He also was hailed on America's Most Wanted as one of the "Good Guys" who brings down the criminals.

But today, just a few years later, Dobyns says that after risking his life on assignment, he has been left vulnerable by the very agency that he proudly served. (Read Dobyns' account of faking a murder to get into the Hells Angels)

With his undercover work done and his real identity as a law enforcement agent exposed, Dobyns says the Hells Angels and other gangs enlisted by it came after him, issuing death threats. Dobyns claims that the ATF -- rather than protecting him -- abandoned him. (Watch Dobyns explain how he infiltrated the gang )

"There was a murder contract on me and there was what was called a green light list, which was circulating in the prison, which was a list of people that various gangs wanted killed," Dobyns told CNN.

In response, Dobyns says, the ATF gave him a routine transfer with no special protection, despite his repeated protests. The ATF could have moved Dobyns and his family under what is known as a "threat policy" -- similar to the kind of protection the government routinely gives witnesses in organized crime cases.

But federal agents who go undercover don't automatically get a high level of protection, according to Dobyns and other ATF agents CNN interviewed.

"In order to save money, I was told it wasn't cost effective," Dobyns says.

Dobyns says he has moved himself and his family several times to elude those who've threatened to kill him. He has filed a claim with the ATF for the emotional stress and financial burden he says he's had to bear as a result. (Watch how Dobyns and his family are living in fear )

In a note to CNN, ATF acting director Michael J. Sullivan wrote that privacy and personnel matters prohibit him from commenting directly on Dobyns' allegations, but he assured CNN that Dobyns' allegations are being fully reviewed by the ATF and the Department of Justice.

"[T]here is nothing more important to ATF and to me than the safety and protection of our employees and their families. We at ATF understand that we have a solemn responsibility to protect the people whom we charge to investigate and arrest the country's most violent criminals," Sullivan wrote.

But more than a dozen former and current ATF agents interviewed by CNN, many of whom have their own lawsuits, claims and serious concerns, said the ATF is failing to protect its agents.

Charlie Fuller is a 23-year retired veteran ATF special agent and a former top trainer of undercover agents, who wrote a manual on undercover work, "The Art of Undercover." He trained Dobyns and many other top ATF undercover agents.

"What happened to Dobyns is not an isolated incident," said Fuller. In many cases, he said, managers don't thoroughly understand the complexity of the undercover work or how to best work with and manage the agents once they're back in the real world.

He said agents are seen as troublemakers or retaliated against if they raise complaints or report problems.

"Threats like what Dobyns faced -- this is the most serious thing an ATF agent can face -- the threats against his family," said Fuller. "How could they ignore something like that?"

Asked about Fuller's claims, the ATF said it would have no further comment for now, saying it would stand on Sullivan's previous statement.

"As ATF executes its mission to prevent terrorism, reduce violent crime and protect the public, we will continue to place the highest value on ensuring the safety of our employees and their families," Sullivan said.