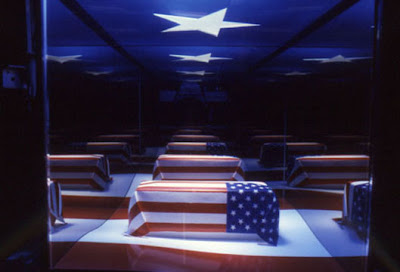 It has inspired films, songs and writing. Now the war in Iraq is inspiring fine artists in numbers, perhaps, unprecedented in any war in history.

In studios from London to San Francisco, artists are struggling to interpret images of the world's most highly publicised war, in sculpture and canvasses, photographs and collages. And although artists responded slowly at first, the past 18 months has seen an explosion of art criticising the conflict.

Last year one of the centrepieces of the Whitney Museum of American Arts Biennial in New York was a recreation of Mark di Suvero's 1966 Peace Tower - a commentary on the Vietnam war - which invited a new generation of artists to contribute panels.

In November, the huge cycle of paintings inspired by the torture scandal at Iraq's Abu Ghraib prison, by the Colombian figurative painter Fernando Botero, will be seen together for the first time at the American University Museum in Washington. It is one of a number of recent works dealing with Abu Ghraib, including a series of giant photographic reconstructions by the controversial West Coast artist Clinton Fein.

It is a sudden flowering of powerful protest art that has brought together artists of an older generation who can remember Vietnam, and a younger generation that on the whole has shied away from overtly political art. It is not just di Suvero who provides a link. The American collagist Martha Rosler has reimagined the work that she produced in the Sixties addressing the impact of the war on the home front, while Gerhard Richter, one of Germany's most important living artists, has also tackled the war in a book of collages entitled War Cut

But it is, perhaps, Botero's paintings, reminiscent in some respects of Francisco de Goya's Disasters of War, that is likely to be the most visible of the works emerging in opposition to the Iraq war.

'It is a testimony,' Botero said. 'I became obsessed with the paintings, spending 11 months doing nothing but work on them. When the first images emerged of Abu Ghraib I was so shocked that a country that presents itself as the model of human rights could do this. It is like a permanent accusation. In that respect art is both weak and strong.'

And although selections from among the cycle of paintings have been shown in New York and Berkeley to good reviews, he is uncertain of the reception something so directly critical of the US will get in Washington, a very different city.

The curator of that exhibition, Jack Rasmussen, admits that he was surprised by the relatively slow response by artists to the war, particularly in Washington. 'I think there is a sensitivity among artists to the risk of producing not art but political posters. I think people have felt it is not going to help their career, because it runs counter to prevailing trends in art. But people are now taking the risk.'

And while Rasmussen is not convinced that art can effect a change to the political landscape, he agrees with Botero that it is important that today's artists bear witness.

'Art cannot change [the war] but it can bear a testimony. When people stop talking about it, the art is still there.' And after the Botero exhibit, Rasmussen has two other exhibitions scheduled for next year - a presidential election year as he points out - that sees artists invited to respond to the war, using Goya's cycle, Disasters of War, as a starting point.

Mark Sladen, director of exhibitions at the Institute of Contemporary Arts in London, who organised the Memorial to Iraq show earlier in the summer, has also been surprised at the slowness of artists in addressing Iraq, but now believes the conflict is inspiring an important transformation in the art world.

'One of the things that motivated me to do the show at the ICA was I felt the art world had been strangely quiet. I think there has been a bias against work seen as illustrative and dogmatic. It seems to me that situation is unfreezing and people are finding ways to express political issues that are not oversimplified.

'One of the key figures, I think, is the US artist Sam Durant who did a really nice piece for our show, proposing to pile up the debris of the war around Whitehall and the White House. Someone else is the Swiss artist Thomas Hirschhorn.' Indeed, Hirschhorn's most recent work - Superficial Engagement - which some critics have compared to Picasso's Guernica, is a walk-in exhibit that includes hundreds of colour images of Arabs and Afghans who have been blown to pieces.

'I think something really important is going on,' says Sladen. 'It is an important transitional moment, between the market-driven art world and artist pulling powerfully in a different direction.'

In this graphic and disturbing sequence of 82 prints, Goya depicts the brutal conflict between Spanish guerrillas and Napolean's army during the Peninsular War. The prints include scenes of torture, rape, mutilation, famine and execution. Goya finished the series in 1820, but despite the power of the work, it was not published until 1863, more than 30 years after his death. The Disasters of War is often discussed by artists and theorists of the new anti-war art.

Perhaps the most famous of all works of art depicting the horrors of war. The work commemorates the attack by German bombers on the Basque town of Guernica on 26 April 1937. A supporter of the Republican cause in Spain, Picasso began work on the huge mural barely a week after the bombing. The painting has since become an iconic work to anti-war protesters and was the site of vigils during the Vietnam war. Like Goya's series, it is much mentioned as a source of inspiration to other artists.