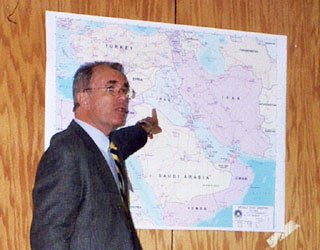 Quick Facts [RTN] - 9/7/2007: Raytheon Co. (RTN) on Friday said its Network Centric Systems elected Les Janka as vice president for Kingdom of Saudi Arabia NCS operations. Janka would be based in Riyadh, Saudi Arabia, and will act as the senior NCS executive in the Kingdom. Prior to joining NCS, Janka served as an international affairs expert during a 30-year career as a consultant and multiple assignments in the U.S. government.
http://www.rttnews.com/sp/Quickfactsnew.asp?date=09/07/2007&item=63
••••••••••••••••••••••••
PORTRAIT OF A CIA JACKAL

Leslie A. Janka is a Senior Associate at Commonwealth Consulting. He has more than 25 years experience as an international affairs specialist in the U.S. Government, business consulting and academic institutions. Prior to joining Commonwealth Consulting, Janka directed the international practice of the energy utility and telecommunications specialty consulting unit of Arthur Andersen, LLP.

From 1964 to 1968, Mr. Janka worked for the U.S. Information Agency. He then served until 1971 as Assistant Dean of the School of Advanced International Studies of Johns Hopkins University, when he was appointed Special Assistant to Henry Kissinger on the National Security Council at the White House.

He became Senior NSC Staff Member for Legislative and Public Affairs in 1974. Moving to the Pentagon in 1976, Janka served as Deputy Assistant Secretary of Defense for Near Eastern and African Affairs. Between 1978 and 1982, he worked as a consultant assisting European corporations in marketing advanced military technology to the Pentagon.

In 1984, after serving in the White House as Deputy Press Secretary for Foreign Affairs under President Ronald Reagan, he became Executive Vice President of one of Washington’s premier foreign policy lobbying and public affairs consulting firms, leading that firm’s extensive international political and trade advisory practice in the Middle East and Africa.

Janka is a frequent writer and lecturer on the Washington political scene, specializing in international affairs and the formulation of U.S. foreign and defense policy. A graduate of the University of Redlands, Janka received a Masters Degree in International Relations and Middle East Studies from the School of Advanced International Studies at Johns Hopkins University.

http://en.wikipedia.org/wiki/Les_Janka
Posted by Alex Constantine at 12:26 AM