UK Terror Suspect a Victim of Hysteria and Propaganda 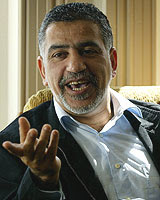 A casualty of Osama's war

How fitting that the SIS should drop its pretence of a case against Ahmed Zaoui the same week as the sixth anniversary of 9/11, in which Osama bin Laden re-emerged to deliver his occasional state of the Islamic nation address.

Zaoui was in many ways a victim of the hysteria and propaganda that blew around the world like dust from the falling Twin Towers. Those who inhaled deeply must be choking on it now.

SIS boss Warren Tucker put the inevitable spin on the decision to remove Zaoui's security risk certificate - he looked like a risk back in 2002; things have changed since - but that glossed over the absurd incompetence his department and others displayed right from the beginning.

The exhaustive work of the Refugee Status Appeals Authority long ago showed the government case was a crock.

As for the suggestion that Zaoui, too, has backed down - becoming more "candid" in his offerings to the SIS - we're talking about a man who hasn't been allowed to know the accusations against him. Just what candour is possible in such situations?

Given the constantly shifting reasons for keeping him under suspicion, it's a wonder Zaoui could keep track of what he was meant to have told the authorities at any given time.

There has been the usual huffing and puffing from those who think we're a soft touch for refugees (or terrorists - they're the same thing to some people), and who must now convince themselves that the SIS itself has succumbed to the politically correct liberal rot infecting every other arm of the state.

The truth is, with all the ineptitude, unprofessionalism and arse-covering that characterised the official response to Zaoui (he wasn't being held as a terror threat, remember, merely as a diplomatic inconvenience) about the only thing going for the government was a reflexive siege mentality.

Pretty much anything - including the absence of evidence - can be hidden under the national security blanket. Far from being an agent of al Qaeda, then, Zaoui had more reason to hate the jihadists than most, for having provided the justification for the stateless limbo into which he was cast.

That the odd good Muslim has become collateral damage in the great clash of civilisations won't have been causing bin Laden many sleepless nights, however - a paradox he touched on in his recent straight-to-video release just days before Zaoui was suddenly absolved in New Zealand.

According to the kind of people who notice such things - is there a CIA hairdressing section? - Osama has dyed his beard. Far more startling, though, was his mention of the overlapping interests of the Mujahideen (aka Allah's holy warriors) and the interests of major corporations and Washington's neoconservative cult.

By triggering a "war on terror" that has humiliated and potentially bankrupted the US, bin Laden concedes, al Qaeda has unintentionally helped enrich corporate profiteers and enabled certain geopolitical ambitions to be realised.

The law of unintended consequences? The deaths of many? So be it, he seems to be saying, if it hastens the end of the Great Satan.

The English translation of his speech runs to roughly 4000 words, which possibly explains why you haven't seen the director's cut on commercial television yet.

In fact, the mainstream Western media's presentation of the video could be summarised thus: crazy Dr Evil guy back, now using hair products, wants Americans to convert to Islam, ha ha, nothing more to see here folks, move along . . .

Maybe the lack of analysis is due to his scathing critique of the "information media", which he says has lost all credibility and "manifested itself as a tool of the colonialist empires".

If he comes across a bit like an Islamic Noam Chomsky, he confirms the impression by actually name- checking the great US dissident, who, according to bin Laden, "spoke sober words of advice prior to the war, but the leader of Texas doesn't like those who give advice".

It's unclear how Chomsky himself feels about the props from bin Laden, but the American anti-war movement needs an endorsement like that about as much as Helen Clark needs a human rights outrage smouldering in the liberal middle- class basement heading into election year.
How often has she wanted to wail of Zaoui, "who will rid me of this turbulent priest?"

Clark has been scrupulous in maintaining what the CIA would call plausible deniability over any direct involvement in the case, all the while presiding over a security regime that allowed such an outrage to continue.

Enough time has now elapsed, obviously, for the SIS to put the whole embarrassing fiasco to bed. (Sorry about the solitary confinement, by the way.)

About the best that can be said is that Ahmed Zaoui had a better hearing here than he might have in John Howard's Australia.

Although that might not be saying much, it is at least in keeping with the spirit of New Zealand's notional neutrality in Bush's futile war.

As bin Laden boasted in his video, despite the overwhelming economic and military might of the US, 19 hijackers were able (by the grace of Allah, naturally) to alter the course of history.

A lot of people have ended up on the wrong side of that malign equation. Thankfully - and, to be frank, amazingly - Ahmed Zaoui is no longer one of them.
Posted by Alex Constantine at 12:07 PM