The Terror Formula: On "Mushroom Clouds Over New York" and Herman Goering 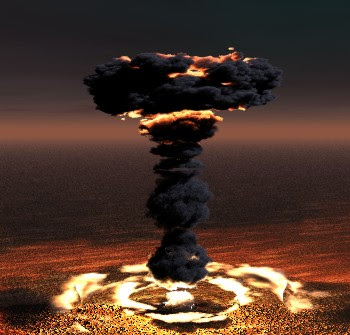 From: "The Iran Attack and Aftermath - 'Whoopie! We’re All Gonna Die!'”
by Gary Leupp

... Paul Wolfowitz, Donald Rumsfeld’s deputy and one of the chief architects of that crime, admitted in an interview in May 2003 that the Bush administration had made a political decision to justify the attack by focusing on the issue of Iraq’s (non-existent) WMD: “The truth is that for reasons that have a lot to do with the U.S. government bureaucracy we settled on the one issue that everyone could agree on which was weapons of mass destruction as the core reason.” We know from the “Downing Street memo” that British intelligence had concluded by July 2002 that “the intelligence and facts were being fixed [by the Bush administration around the policy.” In other words, the Bush administration, through its spooky “Office of Special Plans” under neocon Douglas Feith, and via agents in the press such as the New York Times’ Judith Miller, was disseminating disinfomation designed to terrify the American people into supporting what was entirely a war of choice.

The coordinated repetition of the warning about a “mushroom cloud over New York City” was much in the spirit of the Nazi propaganda efforts of the 1930s.

“Naturally, the common people do not want war,” Herman Goering said during the Nuremberg trials, “but after all, it is the leaders of a country who determine the policy, and it is always a simple matter to drag people along whether it is a democracy, or a fascist dictatorship, or a parliament, or a communist dictatorship. Voice or no voice, the people can always be brought to the bidding of the leaders. This is easy. All you have to do is to tell them they are being attacked, and denounce the pacifists for lack of patriotism and exposing the country to danger. It works the same in every country.” In carefully contrived speeches the Fuhrer built the case for war on Poland, that gathering threat to the German people, their homeland, their Reich. It worked. The neocons understand this very well. ...
Posted by Alex Constantine at 10:19 AM