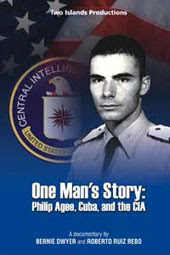 Dwyer will lead a discussion after the screening, and Agee will answer questions from Cuba via an international telephone hookup.

Agee resigned from the Central Intelligence Agency in 1968 and wrote Inside the Company: CIA Diary.

Macalester College, founded in 1874, is a national liberal arts college with a full-time enrollment of 1,884 students. Macalester is nationally recognized for its long-standing commitment to academic excellence, internationalism, multiculturalism and civic engagement.