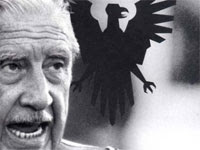 "The 9/11 attack was the parallel to the Pinochet coup ... Operation Condor ... Pinochet also imposed extraordinary police powers ... After 9/11, thousands of Arabs and Muslims were also rounded up by the US military and kept in prison in secret ... They were also tortured ... 9/11 was the equivalent of a coup for Bush. Its version of Operation Condor is being assembled in the Pentagon by Undersecretary of Defense Stephen Cambone and his military deputy, Lt. Gen. William G. Boykin ..." – Maria Montelibre

"In this world, in this strange world of covert overthrow of governments and clandestine armies and secret operations, the problem we're facing is that you are working with two realities: you're working with ... exchange of power, economic power, power over people, controlling their lives. In order to do that you disguise certain persons and send them into roles to influence. They become actors on a stage and they influence our minds in a way that is not real, but effect a reality that will touch us later." – Mae Brussell, Dialogue Assassination, Broadcast no. 16, October 13, 1971

To Mussolini, "fascismo," a word he coined, had dual meanings. It is rooted in the Latin "fasces," a rather strange-looking axe with poles strapped to it, but the term also meant "Group."

Christopher Deliso at Antiwar.com found the 9/11 group when he poked into the Plame investigation, "a relay team of hawkish officials providentially placed throughout various government agencies." The serpentine network wound through the CIA, Pentagon, Office of Special Plans, State Department, DIA, NSA and other federal agencies. Deliso described operatives darkening the wings of the Libby investigation, but the same could be said of the 9/11 inquiry: the same "relay team" performed "a handoff of information from the point of origin (the CIA) to the ultimate 'commissioners' of the inquiry." Given the "intra- and inter-factional nature of all of these agencies, it is understandable why the highest officials in the land jostled to get their 'people' strategically inserted throughout the departments, where they could garner inside information and hinder the objectives of their ostensibly direct employers whenever they conflicted with the goals of their real minders..."1

The "minders" were represented by George Schultz and his Hoover "scholars" at the Bush grooming sessions early in his first run for the White House. The Morgan, Rockefeller and Harriman syndicates whose interests are served by the think tanks sprawl, too. Skyscrapers have crumbled beneath their feet. 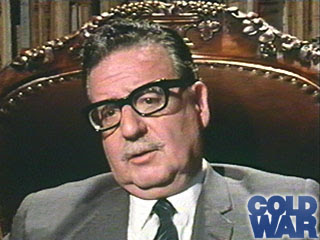 These are the Royals. Royals set loose their hounds for the installation of a dictatorship in Chilé: Kissinger, Bush, Cheney, Rumsfeld, the CIA and a military junta on September 11, 1973: "CIA acknowledges involvement in Allende's overthrow, Pinochet's rise," September 19, 2000 .... "WASHINGTON (AP) -- The CIA is acknowledging for the first time the extent of its deep involvement in Chile, where it dealt with coup-plotters, false propagandists and assassins ... "

Twenty-five years before the CIA posted a public confession, Howard Zinn went ahead anyways and reported that Operation Condor, "the CIA action to overthrow Allende, was approved by the 40 Committee, whose chairman [was] Henry Kissinger. And it was Kissinger who recommended that Rockefeller head the commission to investigate the CIA.

Rockefeller summed up the commission report: 'There are things that have been done which are in contradiction to the statutes, but in comparison to the total effort, they are not major.' The same report can be made on the Corleone family ..."2

Regime change has long been a staple of US foreign policy. Exactly 28 years later, it happened again. But the strategy had evolved with the times. The idea was not to merely impose military rule on a defenseless population, but to rechannel resources of government - its finances, military force, technology, personnel and secrets - their way. 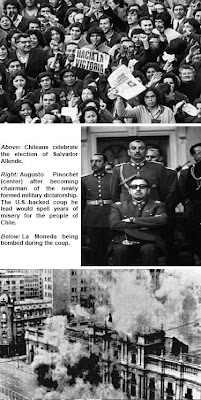 The early "jostling" to insert the 9/11 relay team behind Bush resulted in the appointment of Donald H. Rumsfeld as Secretary of Defense. Rumsfeld was among the the central genocidists engaged in Operation Condor I.

"Latin America: Murder, Inc.," a classified report prepared by the Senate Foreign Relations Committee Subcommittee on International Operations, revealed the origins of Condor. The title reiterated a confession by Lyndon Johnson a few months before his death: "We were running a Murder, Inc. in the Caribbean."

The Senate report explained that the U.S. had "joint operations between Argentina, Bolivia, Brazil, Chile, Paraguay and Uruguay. The joint operations were known as Operation Condor. These are special teams used to carry out [the] killing of enemies." Jack Anderson offered a glimpse of "Operation Condor, An Unholy Alliance" on August 3, 1979:

"Assassination teams are centered in Chile. This international consortium is
located in Colonia Dignidad, Chile. Founded by the SS, led by Franz Pfeiffer Richter, Adolf Hitler's 1000-year Reich may not have perished. Children are cut up in front of their parents, suspects are asphyxiated in piles of excrement or rotated to death over barbecue pits." Colonel Otto Skorzeny, a postwarm CIA recruit, code-named the Battle of the Bulge Operation Greif - "Condor."3

Another CIA recruit oversaw the Chilean incarnation of Condor.

Global Research reports: "Henry Kissinger belongs in the dock alongside the Chilean dictator.... He remains a prominent figure in the affairs of the US ruling establishment and is protected by the government. In 2002, the Bush administration attempted unsuccessfully to name this war criminal as the head of the 'independent' panel investigating the September 11, 2001 terrorist attacks on New York and Washington.

"George Bush senior should be the subject of an indictment for the role the CIA played under his direction in fostering and covering up for the assassination squads that roamed Latin America and, ultimately, the streets of Washington.

"The most prominent figures in the Bush administration - Vice President Dick Cheney and Defense Secretary Donald Rumsfeld - are likewise implicated. Cheney was the White House chief of staff during the Condor Operation, while Rumsfeld was defense secretary, supervising US ties to the Latin American military."4 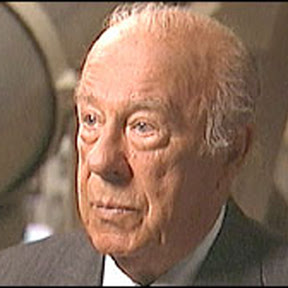 Rumsfeld crony George Schultz established business ties with the Pinochet regime, and learned a thing or two about fascist economics for grafting to domestic policies. Independent Latin journalist Maria Montelibre writes, "General Pinochet’s Labor Minister and Mining Minister in those days, José Piñera, is a Harvard educated boy, friend of George Schultz, among others. Piñera is now head of the Cato Institute Privatization Project in the U.S., which supports and instigates Bush’s privatization schemes. Piñera planned the Social Security privatization plan in Chile with Dictator Pinochet."5

The Condor is Rumsfeld's again, and it was spotted by a reporter for Ireland's Village magazine in 2004: "Extraordinary Rendition bears more than a passing resemblance to operation Condor, the 'multinational of terror' organised by six US-backed Latin American dictatorships in the 1970s." The Latin American terror program crossed national borders. "Regimes swapped suspects and facilitated death squads and kidnap teams. Suspects were disappeared without a trace, held without due process and monitored by physicians during torture sessions." The post-9/11, Condor-like rendition program was "first mooted inside the offices of US intelligence," at the behest of Donald Rumsfeld.6

Others noticed haunting similarities between Condor and Rumsfeld's "war on terror." An editorial appeared in The Nation in January 2005: "Did anyone in the Bush White House cast an uneasy eye over the new indictment of Gen. Augusto Pinochet? It may seem over the top to mention that old buzzard in the same breath as an elected US President. But consider Task Force 6-26. It sounds like a relic of Pinochet's Operation Condor.... Task Force 6-26 is a secret unit composed mostly of US Navy SEALs operating in Baghdad - its existence unacknowledged by the Pentagon. According to the Washington Post, a fact-finding mission for Army generals warned a year ago that Task Force 6-26 was running an off-the-books prison for detainees."7

But Rumsfeld coordinated with others in Washington operating on behalf of the "minders," as William Blum notes: "1973, September 11, CHILE: President Allende overthrown by General Pinochet in a bloody coup in which 3000 Chileans are massacred. The Rockefellers' ITT corp., now run by John McCloy, donates $1 million to the coup effort, which is orchestrated by Henry Kissinger."8 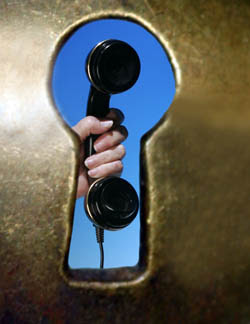 The planning was conceived in pitiless detail by social engineers. In the 1960s, Abt Associates - a consulting firm founded by Clark C. Abt, a German who migrated to the U.S. in 1937, earned a degree at MIT and joined Raytheon after the war - assisted the Pentagon and CIA with Project Camelot, a computer model for destabilizing foreign governments. Socialist scholar Guerry Hoddersen writes that Abt Associates "developed a simulation game called Politica that drew information from a computer linking the files of the CIA, the Defense Intelligence Agency and the State Department. Politica was used in training Third World police" and predicting "which social forces could be mobilized against leftist governments."9

As early as 1965, the American Anthropological Association's executive board began to receive complaints concerning social engineering projects in the Third World. The DoD and CIA recruited anthropologists to assist in counterinsurgency operations, and from this program rose Project Camelot with its cynical code-name. The Army, according to the AAA, "had a contract with American University to study sociopolitical factors that could lead to internal warfare in that country."10

A survey of Condor undertaken by an independent Virtual Truth Commission ("Telling the Truth for a Better America") exposed the "minders" of the coup:

"......................... 1976-OPERATION CONDOR, SOUTH AMERICAN ASSASSINATION CARTEL, THE YEAR GEORGE BUSH SR. IS CIA DIRECTOR. In 1976, Nelson Rockefeller was Vice President (to Ford), and his advisor Henry Kissinger was Secretary of State. In this year Kissinger's puppet dictator Pinochet, of Chile, organised Operation CONDOR, to co-ordinate death squad assassinations by the secret police of the dictators of Chile, Brasil, Argentina, Uruguay, and Paraguay . 30,000 leftists were assassinated/ executed/"disappeared."... Many of the top ranking Nazi war criminals in South America are believed to have lived in Colonia Dignidad. In 1993, a cache of documents called the 'ARCHIVES OF TERROR' was found in Paraguay detailing Nazi war criminal involvement in Operation Condor, and listing victims, including Israeli agents who were trying to find Nazis to bring to trial. It is highly probable that George Bush and Henry Kissinger knew about, and directed, Operation CONDOR. General Pinochet was never ashamed of his pro-Nazi fetish, preferring Nazi uniforms and marching music. In 1985 an American professor, Boris Weisfeiler, was disappeared at Colonia Dignidad. Today Dignidad is a prospering commune valued at $5 billion, but closed to the public and protected by the Chilean military. Today David Rockefeller is the scion of his families' empire, running Chase-Manhattan Bank, the Trilateral Commission, the Council on Foreign Relations (CFR), and Rockefeller Center, NYC. Kissinger was Bush jr's choice to head the September 11th investigation. Paul Bremer III, former Director of Kissinger Associates, was Bush's appointed ruler of Iraq."11
---
NOTES


2) Howard Zinn, "The CIA, Rockefeller, and the Boys in the Club," Howard Zinn Reader, 1975. http://www.thirdworldtraveler.com/Zinn/Rockefeller_
BoysClub.html

10) James N. Hill, "The Committee on Ethics: Past, Present, and Future," Handbook on Ethical Issues in Anthropology, AAA.
http://www.aaanet.org/committees/ethics/ch2.htm