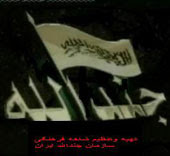 [TY to Brad for the lead]

"The U.S. is supporting ‘Jondollah’, a group who is notorious among Iranians worldwide, for being a terrorist organization. They have been successful in destabilizing Iran’s Eastern provinces, hence weakening the government’s central authority. The U.S. support of Jondollah was uncovered by the media, and this information has further ruined the U.S.’s reputation - even among critics of Ahmadinejad’s government. ... "

21 iranian nationals were taken hostage by the Jondollah terrorist group
Three of the 21 Iranian hostages were to be killed by captor had it not been for their timely release with the aid of Pakistani security forces.

One of the freed hostages, Ali-Asghar Hajipour, cited remarks by the hostage-takers that three of the Iranian captives were to be instantly killed upon arrival in the main headquarters of the terrorist ringleader Abdolmalek Rigi.

Speaking at a ceremony upon return to Iran in the city of Zahedan, Hajipour recalled that the so-called Jondollah gunmen were welcomed by the chief outlaw Rigi upon arrival in Pakistan, who had brought along food and water for his fellow mobsters, "all hirelings for the US".

"It was only after investigations by the Pakistani police and seeing some photos that we realized the person welcoming the bandits was no one but the the notorious terrorist Rigi," he added.

"Only three hours before the Pakistani police raid, Rigi drove away in a vehicle armed with anti-aircraft and machine guns as well as RPG, while holding all the identification documents of the hostages."

Hajipour also said the hostages had been treated inhumanely by the captors in Pakistan, adding the hostage-taking had been done with the aim of exchanging hostages with Jondollah bandits detained by the Islamic Republic.

The outlaw Abdolmalek Rigi is supported by Pakistan's Inter-Services Intelligence (ISI) and financed by the CIA.

The Pakistani government is expected to hand over Rigi and other terrorists to Iran; otherwise it will face charges of supporting terrorist acts against the Iranian territory.

8/20/2007 - Pakistan's paramilitary forces have liberated 21 Iranians from the hands of Iranian bandits on Monday, according to TV reports from Pakistan. The reports said the security forces also arrested 18 hijackers belonging to the outlawed ‘Jondollah' group run by ringleader Abdolmalek Rigi following armed clashes. The state-run Pakistan Television Network announced that one of the hostages was killed during the shootout with the gunmen. Radio Pakistan confirmed the report but did not reveal the nationality of the victims.

Interview with the Commander of Jondollah and his Hostage

In a telephone conversation with Rooz Online, Abdol-Malek Rigi, the commander of the notorious armed group Jondollah which has killed Iranian nationals, military personnel and even officials or taken them hostage, allowed us to speak with one of its current hostages Amir Harati. The interview was held in two sessions on the same day. Here are the excerpts.

Rooz: Could you please introduce yourself?

R: You started rather soon.

AMR: [laughing] I had to. When I saw that they are not letting me grow up, I was forced to take up arms.

R: When did you take up arms?

AMR: It is four years now.

R: How did you come to the conclusion that you needed to take up arms? What were you trying to do that you couldn't achieve, leading you to resort to arms?

AMR: In the past we resorted to many means to protect the national and religious rights of the Baluchis and Sunnis in Baluchistan province. As you know, everybody in Baluchistan is a Sunni and a Baluch. But since this revolution, some 27 years ago, till today the Sunnis have remained the most impoverished group in the country with lots of serious issues. They have suffered and been tortured. The Sunnis in general, and the ethnic minorities such as the Kurds and Baluchis in particular have always had major problems. But since the Kurds have been more active, and have been closer to other countries, have had more political activities, they have made their demands known to the world. It has been different for the Baluchis who have never made their voices heard. Whenever they engaged in religious activities, they were branded as foreign agents and hanged. Hundreds of Sunni clerics, activists and combatants have lost their lives. We now notice in Tehran that someone like Akbar Ganji has launched programs for democracy, which the world supports. Everybody talks about him, even the whole world, and journalists. Everybody heard his calls and spread them to the world. But in Baluchistan we have not had that. If anybody made a sensible criticism about something or some official, he would be immediately arrested or completely eliminated, or silenced. Many have been subjected to all kinds of torture. What I am saying is that before us, there were many who wanted to engage in political activities but the government denied this to them. That is when we started our activities with the aim of defending our rights. And then we realized that there is no other way than to take up arms and begin an armed struggle. This is our last means.

R: Where did you study? How did you learn about these things?

AMR: Right here. Through life. We realized that no one was defending our rights. Whenever a journalist is arrested, the whole world is mobilized against it. Whereas our problems are never pursued. There was a case when a man was arrested because he had a CD, and then his hand was cut off. Today I heard a man had been arrested because he had a Tasuki CD [Tasuk is a region in the south of Iran), and then his nails were pulled out of his fingers. How could we remain indifferent when things like this happen to our people. You tell me, do we have an option other than armed struggle? They have committed genocide in our province. They kill people simply because they are Baluchis or Sunnis. What other posture can we adopt against them? The have not left any democratic solution for us. They have crushed our national and religious identity, and then they call us secessionists! We are not secessionists. Had we been, we would not have accepted talks with them. Even though these people are not trustworthy. We want to hold talks with them in the presence of formal international organizations. Talks in the desert or in a house are useless. We do not trust them because they have revoked on their earlier promises they made to us.

R: How many hostages do you hold right now?

AMR: 6 are from the town of Tasuki, and we have Ahmad Sheiki who is a senior commander in the Baseej para-military force.

R: Who was the young man you recently killed?

AMR: His name was Hamid Reza Kaveh. He was a colonel in the police, a commander of Special Forces. You have no idea what he had done.

R: So you had planned these hostage events?

AMR: Yes, some of them. Our targets were the governor and governor general of the province, who escaped. Since then, they have been saying that we are simply smugglers and vagabonds. I do not refute that among our tribes smugglers exist as well. But we must look and understand why they have become smugglers. Why do they instill hatred against the Baluchis when the Baluchis are like any other Iranian. Nobody hears their calls.

R: Is it possible to talk to the hostages?

AMR: Come talk to him.

R: When did they capture you?

AH: About two months ago. I was in Tasuki on my way from Zabol to Zahedan when they captured me.

AH: I am a police officer.

AH: Yes. I am serving in Zahedan. I was driving in my personal car. They thought that I am part of the military and so captured me [his voice begins to crack].

R: What is your condition now?

AH: I am in good spirits. They treat us well and we have no problems in this regard.

R: What are you concerned about?

AH: We want to return to our families [he says with a cracked voice]. If they meet the requests of these brothers, then I will be returned to my wife and children.

R: If officials could hear you now, what would you tell them?

AH: [he begins to plea] I urgently request that they solve the Jondollah issues. They too have prisoners. Their prisoners have been in limbo for years now. Free them so they too can return to their families. Then we too shall be able to return to ours. I have personally talked to Mr. Shahriari who is a Majlis (Iran's Parliament) MP. I asked him what he had done for us. He said we pray for you. What kind of an answer is this. We can do that ourselves here, day in, day out.

R: Are you Shiite?

R: What is your request and message?

AH: I request in the name of the same God that you and we believe in, to do what these brethren want so I can return to my life. I am innocent. Why do they call and say "kill them, make them martyrs"? Is this the God's way?

R: Do you mean some officials tell Jondollah to kill you?

AH: Yes. They tell them to kill us. They way we have plenty of martyrs. Is this a human thing to say?

R: Where are you being kept? In which country?

AH: It is not clear to me. I think we are in the mountains of Baluchistan. Our eyes were blindfolded when we were brought here.

R: Do you believe that if the wishes of these people are not fulfilled, they will kill you?

R: How do they kill?

AH: [silence] I do not know. I know that if their requests are not met, they will definitely kill us. Please convey our message to the authorities. We have not committed any crime. Please do something so that our request and those of the Jondollah are met.

The phone goes dead, as if Mr. Amir Harati was taken away.