Rupert Murdoch: The Joke is on US

" ... Liar, warmonger, cancerous tumor. ... Perhaps Murdoch's embrace of his depiction as a cartoon figure of evil and low scruples akin to Charles Foster Kane isn't a joke on Murdoch. Perhaps the joke is on us. ... "
http://www.slate.com/id/2174801/
•••••••••••
The Rupert Murdoch Film Festival (Transcript)
Hollywood's view of the global media baron.

Posted Wednesday, Sept. 26, 2007, at 5:29 PM ET
Note: This is a transcript of the narration for "The Rupert Murdoch Film Festival," a Slate V production. To view the video, click here, or click the media player embedded in this page.

Liar, warmonger, cancerous tumor. Rupert Murdoch has been called this and worse on the way to building his $62 billion global media empire. Over the past two decades, Murdoch and the Murdoch persona have become cinematic shorthand for filmmakers in a hurry to depict opportunism, greed, vulgarity, and nastiness.

Although Murdoch broke into pictures in 1985 by purchasing 20th Century Fox, the Murdoch character didn't rate major screen treatment until six years later, debuting in a British docudrama about the forged Hitler diaries.
Actor Barry Humphries—best known as Dame Edna—plays Murdoch as an Australian hyena, delighted by his own avarice and power. The real Murdoch bid handsomely for the rights to publish the Hitler diaries, but after they were exposed as forgeries, he shrugged, "After all, we are in the entertainment business." 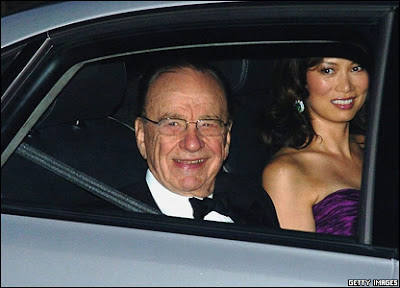 Murdoch hatred has always run deepest in Britain, where they know him well. Stephen Fry and Hugh Laurie skewer the tycoon in this British TV sketch that imagines Murdoch as George Bailey in It's a Wonderful Life.

The birth of his Fox television network and Fox News Channel cemented Murdoch's status as an American media tycoon. Ever since, filmmakers have been exploiting the exploiter. A TV biopic about Jay Leno and Dave Letterman has Murdoch making a bid for Letterman's talents. In a John Cleese film, a Murdoch-esque character owns a media conglomerate called Octopus Inc. An HBO comedy from the same period gives Murdochian dimension to two unscrupulous media moguls played by Ben Kingsley and Gabriel Byrne. The latest rip on Murdoch is an episode of Law & Order—Criminal Intent, which mines the controversies of his family life.

Murdoch was born to play the right-wing villain. But a recent Australian docudrama captures a moment from the young newsman's life in which he battled the establishment to rescue a convicted man from the gallows. Murdoch is no bleeding-heart liberal in this story, mind you. His primary goal is to sell papers.

Hollywood's full vilification of Murdoch comes in 1997 with Tomorrow Never Dies, an awful James Bond film. Jonathan Pryce plays a mad media tycoon who tries to provoke China and Britain into starting World War III so he can extend his empire into China. The plot makes no sense, but Pryce brings Murdoch's legendary competitiveness to full boil.

Murdoch's royal jesters at the Fox-owned sitcom The Simpsons ridicule him in this episode. He battles to regain control of his Super Bowl skybox after Homer and friends commandeer it. Murdoch voices his animated self, declaring himself a "billionaire tyrant."

Is this proof that Murdoch has a good sense of humor about his public image, or is there a better explanation? Perhaps Murdoch's embrace of his depiction as a cartoon figure of evil and low scruples akin to Charles Foster Kane isn't a joke on Murdoch. Perhaps the joke is on us.

Rupert Murdoch Superstar does have a knack of getting the last laugh.
Posted by Alex Constantine at 11:25 AM