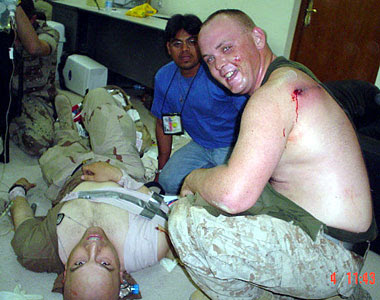 BAGHDAD (AP) — The Iraqi government said Monday that it was revoking the licence of an American security firm accused of involvement in the deaths of eight civilians in a firefight that followed a car bomb explosion near a State Department motorcade.

The Interior Ministry said it would prosecute any foreign contractors found to have used excessive force in the Sunday shooting.

It was the latest accusation against the U.S.-contracted firms that operate with little or no supervision and are widely disliked by Iraqis who resent their speeding motorcades and forceful behaviour.

Underscoring the seriousness of the matter, the State Department said Secretary of State Condoleezza Rice planned to call Iraqi Prime Minister Nouri al-Maliki to express regret and assure him that the U.S. has launched an investigation into the matter to ensure nothing like it happens again.

Interior Ministry spokesman Abdul-Karim Khalaf said eight civilians were killed and 13 were wounded when contractors believed to be working for Blackwater USA opened fire in a predominantly Sunni neighbourhood of western Baghdad.

"We have cancelled the licence of Blackwater and prevented them from working all over Iraqi territory. We will also refer those involved to Iraqi judicial authorities," Khalaf said.

The spokesman said witness reports pointed to Blackwater involvement but said the shooting was still under investigation. It was not immediately clear if the measure against Blackwater was intended to be temporary or permanent. 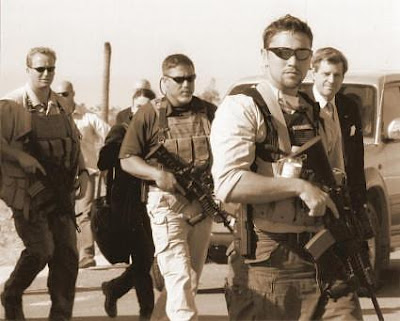 
Blackwater, based in Moyock, N.C., provides security for many U.S. civilian operations in the country.

The secretive company, run by a former navy SEAL, has an estimated 1,000 employees in Iraq and at least $800 million in government contracts. It is one of the most high-profile security firms in Iraq, with its fleet of "Little Bird" helicopters and armed door gunners swarming Baghdad and beyond.

Phone messages left at the company's office in North Carolina and with a spokeswoman were not immediately returned.

The U.S. Embassy said a State Department motorcade came under small-arms fire that disabled one of the vehicles, which had to be towed from the scene near Nisoor Square in the Mansour district.

"There was a convoy of State Department personnel and a car bomb went off in proximity to them and there was an exchange of fire as the personnel were returning to the International Zone," embassy spokesman Johann Schmonsees said, referring to the heavily fortified U.S.-protected area in central Baghdad also known as the Green Zone.

Officials provided no information about Iraqi casualties but said no State Department personnel were wounded or killed.

The embassy also refused to answer any questions on Blackwater's status or legal issues, saying it was seeking clarification on the issue as part of the investigation.

Al-Maliki late Sunday condemned the shooting by a "foreign security company" and called it a "crime."

State Department spokesman Sean McCormack said the United States had not been notified of any Iraqi government decision to revoke Blackwater's licence and declined to speculate as to how that might affect State Department activities if it happened.

"The bottom line is that the secretary wants to make sure that we do everything we possibly can to avoid the loss of innocent life," McCormack told reporters in Washington.

http://canadianpress.google.com/article/ALeqM5h6kNNUWNA5YHK7tU--Y_rI4J4XjA
Posted by Alex Constantine at 11:04 AM