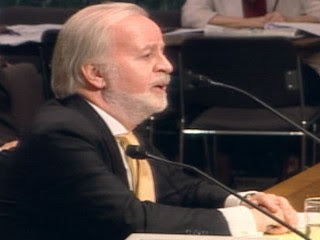 Members of the Senate intelligence committee have requested the withdrawal of the Bush administration's choice for CIA general counsel, acknowledging that John Rizzo's nomination has stalled because of concerns about his views on the treatment of terrorism suspects.

The decision followed a private meeting this week in which committee leaders concluded that the troubled nomination could not overcome opposition among Democratic members. It comes less than a month after a key member, Sen. Ron Wyden (D-Ore.), announced his intention to block the nomination indefinitely.

Rizzo, a career CIA lawyer, has drawn fire from Democrats and human rights groups because of his support for Bush administration legal doctrines permitting "enhanced interrogation" of terrorism detainees in CIA custody.

Two U.S. officials familiar with the committee's decision said the request for Rizzo's withdrawal has been conveyed to Gen. Michael Hayden, the CIA's director. The officials, who insisted on anonymity because of the sensitive nature of the committee's discussions, said lawmakers had hoped to avoid the formality of a negative vote on Rizzo's nomination out of respect for his long service at the intelligence agency. Rizzo has served with the CIA since 1976 and acted as interim general counsel from 2001 to 2002 and from August 2004 to the present.

CIA officials declined comment on whether a formal request had been received, but a spokesman said Hayden continues to support Rizzo's nomination. "Director Hayden believes Mr. Rizzo is a fine lawyer and is well-qualified for the post," agency spokesman Mark Mansfield said. "This has been, and continues to be, his view."

The White House also signaled its continued support for Rizzo. "We continue to support Mr. Rizzo's nomination and believe he is well-qualified to serve in this important position," spokeswoman Emily Lawrimore said.

During his confirmation hearing in June, Rizzo testified that he did not object to an administration memo in 2002 that deemed legal some extremely harsh interrogation techniques for CIA detainees. According to the memo, a technique was not considered to be torture unless it inflicted pain "equivalent in intensity to the pain accompanying serious physical injury, such as organ failure, impairment of body function, or even death." Rizzo testified that the legal opinion "on the whole was a reasonable one."

Rizzo also said the CIA does not condone torture, and stressed that the agency's actions must remain "in full compliance with the Constitution, U.S. law and U.S. obligations under international treaties."

Rizzo's positions and his support for harsh interrogations conducted by the CIA at secret prisons have made him a target of human rights and civil liberties groups. On Tuesday, a coalition of organizations issued a statement urging the Senate to reject Rizzo's nomination. "When Mr. Rizzo failed to object to legal arguments that defended torture, he failed to protect his clients -- the president, his CIA colleagues and the American people," said the statement signed by Human Rights Watch, Physicians for Human Rights and three other groups.