What is the Source of Rep. Patrick McHenry's New-Found Wealth? 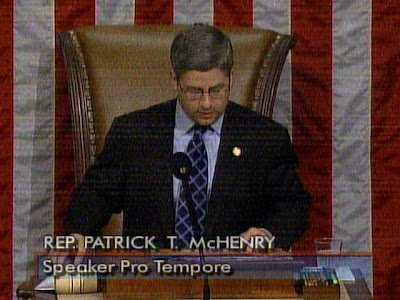 Letter to the editor
News at Norman.com
September 19, 2007

I’ve been looking at Patrick McHenry’s recent U.S. House of Representatives Financial Disclosure Statement on the internet. It’s a form that he’s required to file each year by May 15, and he signed and filed this year’s document on May 7.

The Center for Responsive Politics (opensecrets.org) posts these disclosures, which cover the previous year. One form really isn’t so revealing by itself, because it reports income, net worth, assets, etc. in so-called “brackets.” You know, “at least” as much as one number, but “less than” a second, higher figure.

If you look at two or three of these reports, you get a rather disturbing picture. Our representative has done real well since entering Congress.

McHenry’s financial reports show, for instance, that he went from owning virtually nothing—he said—when he ran for Congress in 2004 to having a net worth in the bracket of “$720,000-$1.2 million.”

Wow! Where did that kind of net worth come from in just three years? If any other 30-year-old had done that, he’d be on the cover of Fortune Magazine, The Wall Street Journal, etc.—or there would be a federal investigation. Maybe there should be one here, too!

Who is the financial advisor for this brilliant young public servant? McHenry has a degree from Belmont Abby College and a real estate license, but nothing in his background that would bolt him to a million dollars so fast!

Doesn’t his story sound a lot like Hillary Clinton’s little trick in the 1980s of turning a $1,000 investment in cattle futures into a nest egg of more than 100 times that amount?

When McHenry first entered Congress, according to his filing, the Gastonia whiz kid reported “$68,009-$281,000” in net worth. That ranked 337th out of 435 members of Congress; in other words, only 98 members of Congress actually were “poorer” than he was.

Not just wealthy, but every young adult’s financial dream—having a net worth of over a million dollars by your early 30s!

Would it be too much to ask the enterprising and wildly successful congressman to address publicly what has gone so terribly right in his financial life since he first ran for Congress in 2004 as “the only small businessman in this race”?

That year, the owner of McHenry Real Estate of Cherryville listed zero assets in his business—same as he does now. Could it be that “McHenry Real Estate” never really was a serious “business” three years ago, as his opponents claimed?

According to the Catawba County Geospatial Information Services (GIS) system, there’s a condo on Lake Hickory at 2200 6th St. NW (#2), Hickory, for which McHenry is listed as the owner since April 27, 2005. If you know the area, it’s located between the former sites of the old Rock House and the old Moose Club on “the lake road.”

This residence is not listed among his apparent real estate rental properties in Gastonia, Cherryville and Charlotte on Schedule III—Assets and “Unearned” Income that he reported on May 7. And yet, there it is, big as day in Deed Book 2658, Page 496, Parcel ID 3704170122320002, showing Patrick T. McHenry as the owner.

Is it barely possible that this young public servant, who likes to have his friends register and vote illegally in places where they don’t actually live, is hiding some of his assets from the public? Maybe he thinks we might object to his amassing too much of a fortune too fast?

So, for sure, something is amiss. Both the deed for 2200 6th St. NW (#2) and the House ethics reports bear McHenry’s signature. What gives here, Congressman? Can he explain this?

Am I the only one around who actually watches him closely enough to know that he will say or write whatever he wants, even on official ethics reports, depending on whether it helps him or hurts him at the time? Why is no one else paying attention?

If my name were Patrick Timothy McHenry, a law degree would be nice to have. I think I would finally try to get used to telling “the truth, the whole truth and nothing but the truth.”

Dennis A. Benfield
Hudson, NC
Posted by Alex Constantine at 11:21 AM