American Colleges and the Nazis 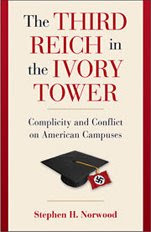 Today’s idea: American universities had amicable ties with Nazi Germany in the 1930s — a record of indifference, complicity and collaboration leading into World War II that stemmed from institutional anti-Semitism, an author says.

In an interview with Inside Higher Ed, Stephen H. Norwood, author of The Third Reich in the Ivory Tower, summarizes what he calls American colleges’ “very shameful record of complicity and indifference to atrocities committed against the Jews from 1933 onward — and actually a lot of collaboration, in terms of participating in well-organized student exchange programs, participating in well-orchestrated Nazi festivals in Germany, sending delegates to those and ignoring protests” back home.

“They just didn’t care very deeply about Jews and anti-Semitism because they were themselves involved in maintaining quota barriers against Jewish students,” the University of Oklahoma historian says, adding that “by warmly receiving Nazi diplomats and propagandists on campus, they helped Nazi Germany present itself to the American public as a civilized nation, unfairly maligned in the press.”

Harvard, Columbia, the “Seven Sisters” women’s colleges and the universities of Virginia, Wisconsin and Minnesota are among Norwood’s targets. Columbia, for its part, concedes that the time was not its finest hour, but criticizes his “extravagant interpretation of Columbia’s modest interactions with Germany in the 1930s,” adding, “Few historians would take it seriously as a reasonable response to the facts he has assembled.” [Inside Higher Ed]
Posted by Alex Constantine at 3:11 AM