UK: For Sale, the Deadly Three Lions Badge of the British SS

"The badge represents one of the darkest and least documented chapters of British military history - a Waffen SS unit made up of British prisoners of war who volunteered to fight for Hitler. ... " 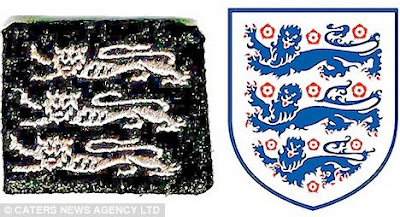 Easy mistake: The rare badge (left) depicting the three lions and very similar to the early football emblem (right) was intended for the sinister British SS

At first glance, it could be mistaken for an early version of the England football kit badge. But these three lions were intended for a contest far more deadly than anything seen on a football pitch.

The badge represents one of the darkest and least documented chapters of British military history - a Waffen SS unit made up of British prisoners of war who volunteered to fight for Hitler. The shameful episode has come to light again ahead of the auction of what is believed to be the only remaining example of the badge, which was worn on the soldiers' black collar tabs.

Taken from a uniform which has since been destroyed, the two-inch wide badge shows the lions of the Royal Standard embroidered in white thread on a black background.

Richard Westwood-Brookes, a historical documents expert, yesterday described it as the rarest item he had handled. It is expected to sell for thousands of pounds. Formed in late 1943, the British Free Corps was the brainchild of John Amery, a notorious traitor whose father was Leo Amery, the wartime Secretary of State for India. 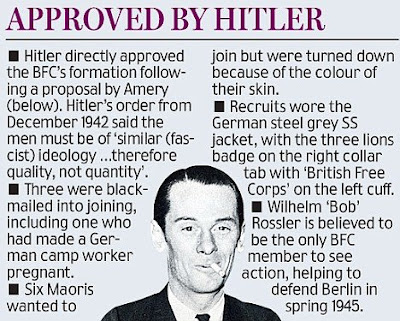 Amery was a facist sympathiser who left Britain for France before the war and was later moved to Germany. He made wartime broadcasts deploring the bombing of Germany and was invited to Berlin after Joseph Goebbels, the German propaganda minster, became aware of his belief that the Jews and Soviets were plotting to overthrow western civilisation.

Together with a German major, he came up with an idea for a unit to 'bash the Bolsheviks' on the Eastern Front, recruited directly from prisoner-of-war camps.

In total, 57 British and Commonwealth citizens were recruited, although only around 20 ever served at one time. While some were fascists and former Blackshirts, others joined up simply to escape captivity.

It is believed the Germans used the brigade mainly for propaganda, although at least one member fought with the regular SS against the Soviets in spring
MI9, Britain's wartime intelligence agency, was aware of the BFC's existence and the men were rounded up after the war.

Professor Eric Groves, a military historian at the University of Salford, said the BFC was a 'very little-reported part of history.' He added: 'Very few people signed up. Many of those that did were driven by a hatred of communism, rather than favouring the Nazi ideology over our own values.' He said the Germans guaranteed that they would not have to fight the British, or take part in espionage work.

The badge is being auctioned together with a letter to the late Olive Hudson, from Preston, from Albert Bormann, brother of Hitler's deputy Martin Bormann, and head of Hitler's private office.

The document, dated October 26, 1936, is a reply to a note sent by Mrs Hudson turning down her request for an autograph from Hitler, who was 'too busy'. Bormann went on to add: 'Your lines addressed to the F¸hrer gave him much joy.'

Both items were sold by a member of Mrs Hudson's family to a collector.
Amery was tried for high treason and hanged in December 1945. But the penalties for those below him were surprisingly lenient.

The auction will be held by Mullocks Auctioneers at Ludlow Racecourse on June 25.

http://www.dailymail.co.uk/news/article-1192708/For-sale-deadly-lions-badge-British-SS.html
Posted by Alex Constantine at 7:37 AM

Wow, that's some freaky stuff. I don't think it per se means that the use of three lions is inherently fascist (its use dates back centuries amongst the English elite) but, a unit of Brits used by the Nazis during WWII? Didn't know that.

Then again, linking support for Nazis, eugenics etc with the British royalty isn't hard to do, because (drum roll)... it's true!