Opinion: "Civilian Bloodbath? So What?" Pentagon Lies about the Body Count 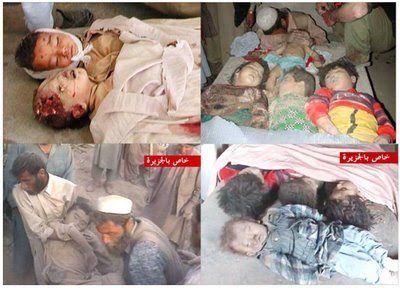 ... On Friday, an internal investigation by the Pentagon into the American airstrike with B1 bombers on villages in Afghanistan's Farah province in May was released. [For more on the attack, which Afghan officials say killed more than 140 civilians, see "Tales of Yankee Power."] As McClatchy reports, the Pentagon -- which at first denied that any civilians were killed -- now admits outright that it sure enough killed 26 civilians...and might well have actually blown 86 hunks of collateral damage to smithereens.

This comes after weeks of high-octane weaseling from American officials -- including the grand LOCO warlord himself, General David Douglas MacArthur Petraeus, who at one point announced that he had video proof that our boys had only been killing dirty rotten terrorist ragheads hidden amongst so-called civilians who might have been giving the insurgents shelter and who anyway like to lie about how many of their family members get killed in these essential raids -- or words to that effect.

Needless to say, this documentary evidence has not been forthcoming: much like the documentary evidence that Colin Powell once promised would show the world that the 9/11 attacks had come from Afghanistan, with Taliban complicity. This dossier of "evidence" -- i.e., the supposed casus belli justifying the entire American military operation in Afghanistan -- has never seen the light of day, and never will. It was just like the murky photograpsh and sinister-looking vials that Powell later waved around the UN to "justify" the invasion of Iraq: a PR prop, part of "rolling out the product" to sell a war already planned.

In any case, the atrocity in Farah was so glaring, the death count was so high, and the eyewitness accounts of the true nature of the attack and its aftermath were so credible, plentiful and multi-sourced that the Pentagon was forced to concede at least some ground to reality -- even though our "Good War" leaders seem to think that "only" murdering 26 civilians is OK. Hey, it coulda been 146, they shrug, with a charming, aw-shucks Dexterish grin. And anyway, it's all in a good cause, right?

And although Afghan officials are standing by the higher death count, the American military brass has already decided that no one will be disciplined for killing the 26 and quite possibly 86 innocent human beings slaughtered in the operation. Hell, our boys actually did themselves proud! As Reuters reports:

The U.S. military is unlikely to discipline troops involved in a deadly air strike in Afghanistan that heightened tensions between Washington and Kabul, the top U.S. military official said on Thursday.

"At least in my review, I found nothing that would lead to any specific action along the lines of what you're asking," Mullen said at a Pentagon briefing when asked it disciplinary action might be considered.

"Civilian bloodbath? So what?" That pretty much says it all. So if you've got an insatiable lust for killing your fellow human beings, there's no need to get some dinky job in a stateside police department, confining yourself to a piecemeal, penny-ante kill-rate. No sir. Get with the LOCO program instead, and you can murder wholesale, worldwide, without fear of retribution -- indeed, with the praise and support of the highest authorities in the land. Hey, it's boffo box office in the Homeland. They can't get enough of that kind of stuff in the shining city on the hill.