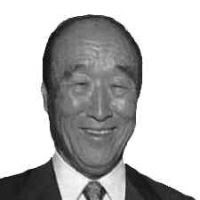 Rev. Sun Myung is now 88 years old. He is founder of the Unification Church and a success in business, owner of the Washington Times, and tracts of land in South America, a horse farm in Texas, a golf course in California, munitions plant in South Korea, etc.

The family lives lavishly—an 18 acre estate in New York that includes two smaller houses and a three-story brick mansion with 12 bedrooms, seven baths, a bowling alley, and a dining room equipped with a waterfall and pond. They have other castle-like homes in South Korea, Germany, Scotland, England.aimed to have been "sent to Earth ... to save the world's six billion people." He stated the great people of the world have declared he is none other than humanity's Savior, Messiah, Returning Lord, and True Parent." He also stated that his teachings have helped Hitler and Stalin be "reborn as new persons."In April 2008, Moon appointed his youngest son Hyung Jin Moon to be the new leader of the Unification Church.

In 1982 Moon was convicted by the U.S. government for filing false federal income tax returns and conspiracy. Appeal of his conviction was upheld and he spent 18 months in the Federal Correction Institution in Danbury, Connecticut.

In the mid-1990s, former U.S. President George H.W. Bush accepted millions of dollars from Moon's Women’s Federation for World Peace to speak on Moon's behalf around the world.

In 2000 Moon joined the Nation of Islam leader Louis Farrakhan in sponsoring the Million Family March in Washington D.C/

In June 2006 the Houston Chronicle reported that in 2004 Moon’s Washington Times gave $1 million to the Greater Houston Community Foundation, which made docation to the George Bush Presidential Library.

At age 85, he hosted an elaborate celebration in the Dirksen Senate Office Building that was attended by some members of Congress and he was crowned.

On July 19, 2008, Moon, his wife, and 14 others were slightly injured when their helicopter crashed during an emergency landing and burst into flames.
Moon has said that he is the Messiah, the Second Coming of Christ and is fulfilling Jesus' unfinished mission.

These and other reported "facts" make for a colorful and sometimes lurid account of one who claims to be our Messiah. But he is not the last to proclaim and be so proclaimed.

http://www.examiner.com/x-11190-Cleveland-Faith--Doubt-Examiner~y2009m6d9-Ten-more-facts-about-a-living-messiah-who-is-growing-old
Posted by Alex Constantine at 9:09 AM