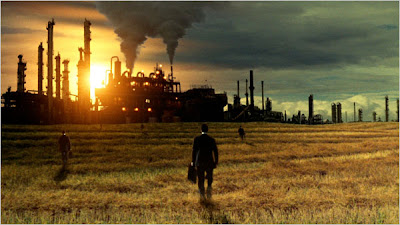 Forget buckets of blood. Nothing says horror like one of those tubs of artificially buttered, nonorganic popcorn at the concession stand. That, at least, is one of the unappetizing lessons to draw from one of the scariest movies of the year, “Food, Inc.,” an informative, often infuriating activist documentary about the big business of feeding or, more to the political point, force-feeding, Americans all the junk that multinational corporate money can buy. You’ll shudder, shake and just possibly lose your genetically modified lunch.

Divided into chapters dedicated to points along the commercial food chain — from farm to fork, to borrow a loaded agribusiness phrase — the movie is nothing if not ambitious. “There are no seasons in the American supermarket,” the unidentified voice intones in the opening scene, as the camera sweeps the aisles of one such brightly lighted, heavily stocked if nutritionally impoverished emporium. From there the director Robert Kenner jumps all over the food map, from industrial feedlots where millions of cruelly crammed cattle mill about in their own waste until slaughter, to the chains where millions of consumers gobble down industrially produced meat and an occasional serving of E. coli bacteria.

The voice in the opening belongs to the ethical epicurean and locavore champion Michael Pollan, author of “In Defense of Food” and “The Omnivore’s Dilemma,” as well as a contributing writer to The New York Times Magazine. (Somewhat confusingly, the movie uses voice-overs without clearly identifying who’s issuing forth on the soundtrack.) Mr. Pollan, who periodically appears on screen seated at a homey-looking table, is a great strength of “Food, Inc.,” as is one of its co-producers, Eric Schlosser, the author of “Fast Food Nation.” These two embodiments of conscience, together with Mr. Kenner, chart how and why the villains not only outnumber the heroes in contemporary food production, but also how and why they outbluff, outmuscle and outspend their opponents by billions of often government-subsidized dollars.

If you’ve read either “Fast Food Nation” or “The Omnivore’s Dilemma,” you won’t be surprised by what the movie shows and tells about the killing floors and soybean fields. Chances are that you’ll still be appalled, which is to Mr. Kenner’s credit. Much as Mr. Schlosser does in “Fast Food Nation,” the movie takes a look at the animal abuse in industrial food production — including clandestine images of sick and crippled cows being prodded to join the rest of the ill-fated herd — but its main focus is on the human cost. It’s a cost visible in the rounded bodies of a poor family that eats cheap if filling fast-food burgers for breakfast and in the obscured faces of farmers too frightened to go on record about Monsanto, the agricultural biotech giant.

As Mr. Kenner marshals his prodigious evidence, including bushels of statistics, a veritable village of talking heads and too many dopey graphics, he makes the case that there’s something horribly wrong with a system in which a bag of chips cost less than a bag of carrots. It’s such a good case that you soon realize there are a dozen more documentaries tucked inside this one. The section on Monsanto is particularly eye-opening and could be spun out in more detail. And I could have spent more time with the philosophizing organic farmer Joel Salatin, who guts his chickens al fresco, hails his free-ranging livestock (“Hey, pig!”) and is a reality show waiting to happen. It could be called “Hello, and Goodbye, Pig!”

There is, in the end, something inherently frustrating about a movie that’s at once as fine, ambitious and, at a crisp 93 minutes, as abbreviated as “Food, Inc.” Time and again the movie stops short before it really gets started, as with the debates over the big business of organic food. The moment when an organic farmer cheerily tells a smiling Wal-Mart representative that her family has been boycotting the company for years is hilarious. But it’s also over before the issues have really been thrashed through. And while I appreciate the impulse behind the final checklist that tells what viewers can do for themselves and the world (er, eat organic), given everything we’ve just seen, it also registers as far too depressingly little.

Opens on Friday in Manhattan.