Nietzsche and the Nazis: Redeeming the Record 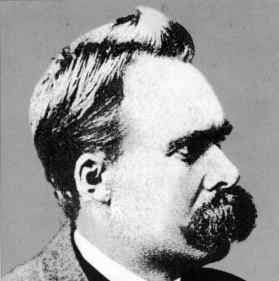 In his new book, Redeeming the Rainbow: A Christian response to the “gay” agenda, author Scott Lively repeats his claim that the rise of Nazi Germany was animated principally by homosexuals. In his first book, The Pink Swastika, Lively chronicles a long line of people who he claims influenced National Socialism and were gay. However, a closer examination of their claims and the record reveal that Lively’s confidence is most likely based on wishful thinking and confirmation bias. To illustrate, I am going to review Lively’s misuse of Friedrich Nietzsche, who Lively touts as a linchpin of National Socialism.

First, Lively (and co-author Kevin Abrams) takes for granted the sentiment of those Nazis who see in Nietzsche the philosophical foundation of National Socialism when they write on page 133:

Among the several men who have been dubbed “the Father of National Socialism” (including Jorg Lanz von Liebenfels), Friedrich Wilhelm Nietzsche (1844-1900) is probably most deserving of this distinction, being so labeled by Nazi luminaries Dr. Alfred Rosenberg and Dr. Franck (Peters:221). Others have called him the “Father of Fascism.” Rabidly anti-Christian and a homosexual, Nietzsche founded the “God is dead” movement and contributed to the development of existentialist philosophy. (ibid.:ix).

While it is true that prominent Nazis admired Nietzsche, it is unthinkable that Nietzsche would have approved of National Socialism. However, Nietzsche’s sister was quite enamored with the Nazis and promoted her brother’s works in that context. Writer Ben Macintyre, who Lively quotes to support his views, dismisses the notion that Nietzsche was sympathetic to National Socialism. Writing in the London Times, Macintyre says,

But Nietzsche was no Nazi. He vigorously opposed German nationalism, as he rejected all mass movements; he had no time for ideologues, mocked the notion of a Teutonic master race and loathed anti-Semitism in all its forms. Elisabeth, by contrast, was an enthusiastic Fascist. An early acolyte of Richard Wagner, she and her furiously anti-Semitic husband Bernhard Förster (this newspaper described him as “the most representative Jew-baiter in all of Germany”) picked up on one of the composer’s barmier ideas, and set off for Paraguay in 1886 to establish an Aryan, vegetarian republic in the middle of the jungle, which they called New Germany.

Nietzsche was bitterly opposed to the racist project from the start, declaring he wanted “nothing whatever to do with this anti-Semitic undertaking… if it fails, I shall rejoice”. Elisabeth was “morally bloated”, he said, “a vengeful anti-Semitic goose”. In an angry letter he told his sister that all of Germany’s racists should be packed off to the Paraguayan jungle, where they could rot harmlessly away.

Without hint of the obvious problem for their thesis, Lively and Abrams admit that Nietzsche condemned anti-Semitism and nationalism. In passing, they note:

Had he lived in that era, Nietzsche might not have become a Nazi. His works include numerous condemnations of anti-Semitism and nationalism (and thus were selectively censored by Elizabeth). But the best measure of Nietzsche’s contribution and importance to Nazism is not in conjectures about what Nietzsche might have thought about Nazism, but in the actual reverence of the Nazis for him.

Nietzsche’s view about the ideas later embraced by the Nazis is not conjecture. Clearly, what the Nazis embraced was the edited version of his work packaged by his racist heterosexual sister. Nietzsche’s sexuality — whatever it might have been — cannot be held to have anything to do with the selective use of his philosophy by his sister and the Nazis. Reading The Pink Swastika, one would not get the big picture. A more apt summary of the situation might be this: A heterosexual couple misrepresented the writings of a man with unknown sexuality to promote racist and nationalist ideas the man abhorred.

Having seriously questioned the influence of Nietzsche actual views on National Socialism, ruminations over Nietzsche’s sexuality may not seem as relevant. Even so, I want to point out how Lively and Abrams reduce significant questions about Nietzsche’s sexuality — what Freud called “an enigma” — to a given. Given the presumed influence on the Nazis, Lively and Abrams need to prove Nietzsche was homosexual for their argument to seem plausible. However, the evidence that Nietzche was a homosexual is quite sparse and speculative. Let’s review what Lively and Abram offer us:

According to Macintyre in Forgotten Fatherland: The Search For Elisabeth Nietzsche, Frederich (sic) Nietzsche never married and had no known female sex partners, but went insane at age 44 and eventually died of syphilis. According to Sigmund Freud and Carl Jung, Nietzsche had caught the disease at a homosexual brothel in Genoa, Italy (McIntyre:91f).

Although Lively cites Ben Macintyre’s book on Nietzsche’s sister, Macintyre actually says Freud and Jung had no proof of the rumor that Nietzsche contracted syphilis via homosexual behavior. Regarding female love interests, it is clear that Nietzsche was quite infatuated with Russian free-spirit Lou Salome’ and proposed marriage to her - which she refused. However, the main point to make here is that Lively assumes the homosexuality of Nietzsche based upon a rumor circulated after his death.

Another more ambitious effort to make this link comes from Joachim Kohler in his book, Zarathustra’s Secret. Kohler notes his proof:

For their meetings in April and October, 1908 Freud’s Wednesday Circle had chosen Nietzsche as their subject for discussion. Freud himself categorically stated that ‘Nietzsche’s ideas had had not the slightest influence on his own work.” Then after a number of aspects of Nietzsche had been discussed, including his latent sadism, his repressed homosexuality and his father-complex, a certain Paul Federn suddenly leapt to his feet. He said that, ‘from a trustworthy source he could report that Nietzsche lived, periodically, the life of a homosexual and that he had contracted syphilis in a homosexual brothel in Genoa’. (p. 210).

‘In front of the entrance to the Nietzsche problem,’ wrote Freud to Zweig, ‘there stands two sentries barring the way. Firstly, one cannot investigate a person unless one is aware of his sexual constitution, and Nietzsche’s is a complete enigma. There is even a legend that he was a passive homosexual and contracted syphilis in a homosexual brothel in Genoa. Is that true? Quien sabe? [sic].’ (p. 212).

About Nietzsche’s sexuality, Freud asks, ‘Who knows?’ calling the subject a “complete enigma.” However, in the hands of Lively and Abrams, no enigma is too difficult for them to unravel in favor of their thesis.

As noted above, Nietzsche had a breakdown at age 44 with psychosis and other neuropsychiatric manifestations. At this point, I doubt it is necessary to deal much with Nietzsche’s demise — was it due to syphilis? or brain cancer? or a form of dementia? Some have speculated that Nietzsche may have contracted the syphilis while a medical orderly with the Prussian army; others believe it happened via a trip to a heterosexual brothel (cf. Kaufmann for theories). Whatever the case, if we are to remain objective, the actual status of Nietzsche’s sexual preferences is indeed an enigma. Stated simply, the Lively/Abrams’ assumption of homosexuality is a speculation based on a rumor. The actual influence on the Nazi movement is Nietzsche’s heterosexual sister, Elisabeth.

Lively’s gay hypothesis dissolves when it becomes clear that many of those he associates with Nazis either were not gay or not Nazis.
……………………………………………

Warren Throckmorton, PhD is Associate Professor of Psychology and Fellow for Public Policy at Grove City College in PA. He also blogs at www.wthrockmorton.com.
Posted by Alex Constantine at 3:55 PM