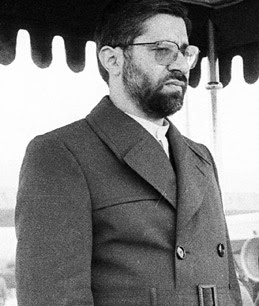 "One can only assume that they're just too busy porking their interns, secretaries, strange men in public restrooms, and teenage pages to be concerned with paying attention to what really matters. ... "

Note: The terrorist in the headline is not mentioned by name in the text. The author is referring to a Time magazine article, "Don't Forget Mousavi's Bloody Past," By Robert Baer, Jun. 18, 2009 issue.

"Before we go too far down the road cheering the forces of Iranian democracy, let's not forget that its public face, Mir-Hossein Mousavi, has American blood on his hands. He was Iran's Prime Minister during most of the 1980s, a time when the country was waging a terrorist campaign against the U.S.

Earlier this week, I received an e-mail from a Lebanese who was present at the creation of the country's Iranian-backed, Shi'ite militia Hizballah in 1982 and on familiar terms with its most radical and violent members. He wrote: "Are you people crazy backing Mousavi, a patron of Hizballah's terrorist wing?"
(See behind-the-scenes pictures of Mir-Hossein Mousavi.)

Indeed, Mousavi, Prime Minister from 1981 to 1989, almost certainly had a hand in the planning of the Iranian-backed truck-bombing attacks on the U.S. embassy in April 1983 and the Marine barracks in October of that same year. Mousavi, as my Lebanese contact reminded me, dealt directly with Imad Mughniyah, the man largely held responsible for both attacks. (Mughniyah was assassinated in Damascus last year.) The Lebanese said Mughniyah had told him over and over that he, Mughniyah, got along well with Mousavi and trusted him completely.

When Mousavi was Prime Minister, he oversaw an office that ran operatives abroad, from Lebanon to Kuwait to Iraq. This was the heyday of Khomeini's theocratic vision, when Iran thought it really could export its revolution across the Middle East, providing money and arms to anyone who claimed he could upend the old order. Mousavi was not only swept up into this delusion but also actively pursued it.

It was Mousavi who appointed Iran's ambassador to Damascus, Ali Akbar Mohtashemi-pur, the Iranian caught red-handed planning the Marine-barracks bombing. Mohtashemi-pur also coordinated the hostage-taking in Lebanon. As a reward, Mousavi gave him the Interior Ministry, where Mohtashemi-pur went on to crack down on what was left of democracy in Iran.

And it is not as if Mousavi kept his support for Iran's secret war on the U.S. a secret. In a 1981 interview, he had this to say about the taking of American diplomats in Tehran in 1979: "It was the beginning of the second stage of our revolution. It was after that we discovered our true Islamic identity."
(Read "The Man Who Could Beat Ahmadinejad: Mousavi Talks to TIME.") ...

Ok, that's probably a rather redundant thread title, isn't it? Sorry about that. Anyway, it looks as though those kook republiCON politicians that just couldn't WAIT to use what's happening in Iran as a political weapon to bludgeon Obama with have once again backed themselves into a corner with their utterly stupid comments.

Never mind that their meddling and interference in US foreign affairs puts this nation at great risk. They really have nothing at this point, and they've proven themselves to be nothing but shameless obstructionists anyway, so why should this be any different?

Now, it appears that, once again, as is usually the case, these idiot republiCONs have opened their fat mouths before checking the facts, and it's going to once again bite them in the ass hard. They simply cannot be trusted with anything at this point.

Turns out that their guy in Iran appears to have been involved in both the April 1983bombing of the US embassy in Lebanon, and the subsequent October bombing of the marine barracks there, that resulted in nearly 200 Americans being killed. Most will remember this as the moment that Ronald Reagan tucked America's tail between his legs and ran away from the terrorist threat, rather than confronting it head on and defeating it.

Undoubtedly, his cowardace on the part of Raygun in the face of these outrageous attacks is what ultimatley led to further terrorist attacks as time went on. So much for the myth that republiCONs are all mighty and macho, and don't take any crap from anyone.

So, here we are, 25 years later, and the republiCONs are once again coddling and snuggling up to this terrorist. The more things change, the more they stay the same, I guess. All I can say at this point is, Thank GOD, the GOP got their asses handed to them again in 2008, and are not in positions of power, where they would undoubtedly lead us into yet another pointless, murderous, costly, unwinnable, permanent military occupation. Just imagine if McCain/Palin had actually won the frigging white house. We'd be aggressively pursuing policy to cozy up to an anti-American terrorist, and launching yet another stupid republiCON war.

These are the same policy geniuses that overthrew a democratically elected government in Iran in the 50's, and replaced it with a brutal dictator, and who also cozied up to and supplied arms (included WMD) to the likes of Saddam Hussein. Republicans simply can NOT be trusted with this nation's national security interests.

One can only assume that they're just too busy porking their interns, secretaries, strange men in public restrooms, and teenage pages to be concerned with paying attention to what really matters. Regardless, we DO know one thing for certain...republiCONs are a direct, immediate threat to the national security of this nation, and can NOT be put into positions of power again.