UK: The Truth about Fascist National Front Past of Britain's Two New BNP Members in Europe 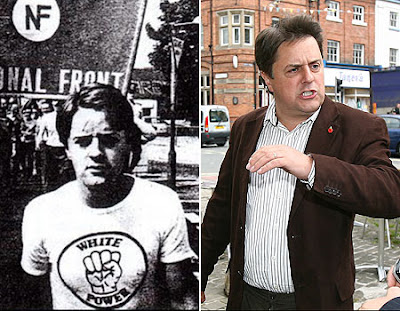 Newly-elected BNP Euro MPs Andrew Brons and Nick Griffin like to present themselves as plain-speaking politicians eager to put across the ordinary man and woman's point of view. But this chilling picture exposes them for what they truly are - vile prophets who preach a Nazi-style doctrine of racial hatred.

It shows Brons and Griffins doing their utmost to incite prejudice at a National Front rally in 1981. Brons, holding the microphone, and Griffin, the scowling man on his left, were prominent members of the NF, which was notorious for extreme racism and violence.

Three years after this picture was taken in Fulham, Brons was convicted of behaviour likely to cause a breach of the peace. He and another NF member were in Leeds shouting slogans such as "death to Jews", "white power" and "National Front".

Brons, who as education officer hosted seminars claiming racism had a "scientific basis", resigned as NF chairman in 1984. He has been a BNP member for at least four years. Griffin, now 50, also later left the NF and joined the BNP, becoming its leader. Nowadays, their racism is more subtle - but it is no less revolting. In the Euro elections Griffin picked up a seat in the North West and Brons got one in Yorkshire and Humber . But their party's share of the vote in those regions was actually down on the 2004 Euro elections. Griffin and Brons sneaked in only because Labour's vote collapsed disastrously in two of its traditional heartlands.

In the wake of their election, more examples of their past emerged yesterday. Brons, 61, once said bombing British Jews would be "well intentioned" in a letter to a fellow extremist.

He said his only concern was the attacks might hurt their cause. After meeting another fascist, Brons wrote: "He mentioned bombing synagogues. Although he is well-intentioned I feel our public image may suffer." He sent the letter in 1965 to facist Francoise Dior. She was later convicted of arson attacks on Jewish buildings. One attack left a student dead and a second seriously injured. Brons also wrote he was sending cash for a black swastika badge and other Nazi material. He said he hoped to recruit by "exhibiting stickers, posters and slogans."

Griffin yesterday tried to play down Brons' sick past as they gloated over their triumph. He told BBC Radio 4's Today programme: "He was a member of some crazy little far-right sect when he was a 17-year-old. He is now in his early 60s. That is an awful long time ago."

Griffin added: "You can only talk about that if every time you talk to someone in the Labour Party you also talk about Peter Hain's record spreading tacks and broken glass on rugby pitches decades ago." He was referring to Hain's anti-apartheid campaigning in the 1970s.

But Gerry Gable, of anti-fascist magazine Searchlight, which obtained his letter to Dior, said: "He has been a bad boy for a long time and I don't believe he has changed his spots."

Preening Griffin yesterday declared the BNP wins, coming on a night when Labour suffered it worst performance at the ballot box since 1910, meant a "huge change in British politics".

2 He became a prominent member of the National Front, famed for its extreme racism and violence.

3 Brons became a member of the NF's "national directorate" in 1974.

4 As NF education officer he ran sessions on racial nationalism, in which he claimed that racism had a scientific basis.

6 Brons led a 1982 NF demo in Northfield. Fellow marchers chanted "We've got to get rid of the blacks."

7 He was arrested selling papers in Leeds two years later with a group heard shouting "Death to the Jews" and "White Power".

8 Brons was convicted of behaviour likely to cause a breach of the peace and fined £50.

9 He finally quit as NF chairman later that year but was lured back into the BNP in 2005.

10 He claimed to be an ex-university lecturer in a speech but actually was at a Further Ed college.

1 He has boasted about reading Hitler's autobiography at just 13.

2 He got involved in far-right politics two years later when his dad Edgar took him to NF meetings.

3 Griffin went on to become an ally of Roberto Fiore, a convicted Italian terrorist.

4 Fiore was involved with the Armed Revolutionary Nuclei who helped bomb a train station, killing 85. 5 In the UK Griffin emerged as leader of a core of activists calling themselves "political soldiers".

6 Joined the BNP in 1995, editing The Rune which praised German wartime Waffen SS.

8 At a demo at Coventry cathedral he accused British airmen of "mass murder".

9 Convicted of behaviour likely to incite racial hatred for publishing claims the Holocaust never happened, he received a £2,300 fine and suspended jail sentence. 10 At trial he claimed the extermination of Jews and others was "a mixture of Allied wartime propaganda, extremely profitable lie and a latter witch-hysteria".