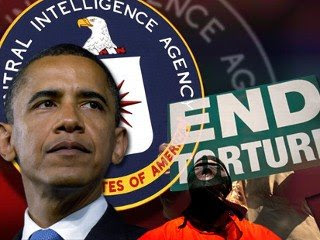 Looking forward is fine - I have nothing against it - but it strikes me as a the wrong direction to turn one's attention when stepping out of a history of lynchings, and all ... BTW, has anyone seen Obama's elusive moral bearings? - AC

" ... approximately 100 detainees, including CIA-held detainees, have died during U.S. interrogations, and some are known to have been tortured to death. ... "

... The premise of so many media discussions of torture is that "torture" is something that was confined to a single tactic (waterboarding) and three "high-value" detainee accused of being high-level Al Qaeda operatives. The reality is completely different.

The interrogation and detention regime implemented by the U.S. resulted in the deaths of over 100 detainees in U.S. custody -- at least. While some of those detass were the result of "rogue" interrogators and agents, many were caused by the methods authorized at the highest levels of the Bush White House, including extreme stress positions, hypothermia, sleep deprivation and others. That's why we've always considered those tactics to be "torture" when used by others -- because they inflict serious harm, and can even kill people.

Those arguing against investigations and prosecutions -- that we Look to the Future, not the Past -- are thus literally advocating that numerous people get away with murder.

The record could not be clearer regarding the fact that we caused numerous detainee deaths, many of which have gone completely uninvestigated, let alone unpunished. Instead, the media and political class have misleadingly caused the debate to consist of the myth that these tactics were limited and confined. As Gen. Barry McCaffrey recently put it:

"We should never, as a policy, maltreat people under our control, detainees. We tortured people unmercifully. We probably murdered dozens of them during the course of that, both the armed forces and the C.I.A."

Journalist and Human Rights Watch research John Sifton similarly documented that "approximately 100 detainees, including CIA-held detainees, have died during U.S. interrogations, and some are known to have been tortured to death." ...
Posted by Alex Constantine at 9:48 AM