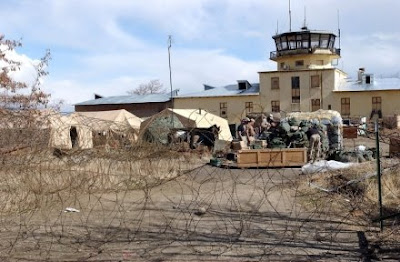 While millions know that the administration of George W. Bush has left Barack Obama with the job of closing the U.S. prison at Guantanamo Bay, Cuba, relatively few are aware that the new president will also face a similar but far larger dilemma 7,000 miles away.

That dilemma is what to do with the what has become known as “the other GITMO” – the U.S.-controlled military prison at Bagram Air Base near Kabul in Afghanistan – and the estimated 600-700 detainees now held there. The “other GITMO” was set up by the U.S. military as a temporary screening site after the 2001 invasion of Afghanistan overthrew the Taliban. It currently houses more than three times as many prisoners as are still held at Guantanamo.

In 2005, following well-documented accounts of detainee deaths, torture and “disappeared” prisoners, the U.S. undertook efforts to turn the facility over to the Afghan government. But due to a series of legal, bureaucratic and administrative missteps, the prison is still under American military control. And a recent confidential report from the International Committee of the Red Cross (ICRC) has reportedly complained about the continued mistreatment of prisoners.

The ICRC report is said to cite massive overcrowding, “harsh” conditions, lack of clarity about the legal basis for detention, prisoners held “incommunicado” in “a previously undisclosed warren of isolation cells” and “sometimes subjected to cruel treatment in violation of the Geneva Conventions”. Some prisoners have been held without charges or lawyers for more than five years. The Red Cross said that dozens of prisoners have been held incommunicado for weeks or even months, hidden from prison inspectors.

"When prisoners are in American custody and under American control, no matter the location, our values and commitment to the rule of law are at stake," said Jonathan Hafetz, staff attorney with the American Civil Liberties Union National Security Project in response to a new report published by the BBC documenting the torture of more than two-dozen former detainees. "Torture and abuse at Bagram is further evidence that prisoner abuse in U.S. custody was systemic, not aberrational, and originated at the highest levels of government. We must learn the truth about what went wrong, hold the proper people accountable and make sure these failed policies are not continued or repeated."

In April, the ACLU filed a Freedom of Information Act (FOIA) request for records pertaining to the detention and treatment of prisoners held at Bagram, including the number of people currently detained, their names, citizenship, place of capture and length of detention. The ACLU is also seeking records pertaining to the process afforded those prisoners to challenge their detention and designation as "enemy combatants."

"The U.S. government's detention of hundreds of prisoners at Bagram has been shrouded in complete secrecy," said Melissa Goodman, staff attorney with the ACLU National Security Project. "The American people have a right to know what's happening at Bagram and whether prisoners have been tortured there."

In a related case, the ACLU is representing former Bagram prisoner Mohammed Jawad in a habeas corpus challenge to his indefinite detention at Guantánamo Bay. The Afghan government recently sent a letter to the U.S. government suggesting Jawad was as young as 12 when he was captured in Afghanistan and taken to Bagram, where he was tortured. Despite the fact that the primary evidence against Jawad was thrown out in his military commission case at Guantánamo because it was derived through torture, the U.S. government continues to rely on such evidence – including evidence obtained during interrogations at Bagram – in Jawad's current habeas case to justify holding him indefinitely.

According to Hina Shamsi of the American Civil Liberties Union (ACLU), “Bagram appears to be just as bad as, if not worse than, Guantanamo. When a prisoner is in American custody and under American control, our values are at stake and our commitment to the rule of law is tested”.

She told us, “The abuses cited by the Red Cross give us cause for concern that we may be failing the test. The Bush administration is not content to limit its regime of illegal detention to Guantanamo, and has tried to foist it on Afghanistan.”

She added: “Both Congress and the executive branch need to investigate what’s happening at Bagram if we are to avoid a tragic repetition of history.”

But most observers believe the solution is more likely to come in the courts and to be inextricably linked to recent judicial decisions affecting prisoners at Guantanamo.

Last June, the U.S. Supreme Court ruled that foreign nationals held as terrorism suspects by the U.S. military at Guantanamo have a constitutional right to challenge their captivity in U.S. courts in Washington. Last week, a federal judge began exploring whether this landmark decision also applies to Bagram.

Like Guantanamo, Bagram was set up as a facility where battlefield captives could be held for the duration of the “war on terrorism” under full military control in an overseas site beyond the reach of U.S. courts.

The Supreme Court has repeatedly thwarted the campaign to insulate Guantanamo from the courts’ review. But the Justice argument is that none of those rulings has any application to Bagram, and that the federal judge should dismiss the legal challenges by Bagram detainees by finding that U.S. courts have no jurisdiction over them.

But lawyers for four Bagram prisoners who have been held in detention since at least 2003 contend that recent Supreme Court Guantanamo decisions also apply to Afghanistan. They are also arguing that another Supreme Court decision — Munaf v. Geren — extended habeas rights to a U.S. military facility in Baghdad.

Barbara Olshansky of the Stanford Law School represents three of the four men who brought the court action. She said “there is no more complete analogy or mirror to Guantanamo than this (case).”

While U.S. District Judge John D. Bates has not ruled on the government’s motion to dismiss the four Bagram cases, he said during the court hearing, “These individuals are no different than those detained at Guantanamo except where they’re housed.”

In its motion to dismiss the cases, the Justice Department argued that Bagram is so much a part of ongoing military operations that there simply is no role for U.S. courts to play. “To provide alien enemy combatants detained in a theater of war the privilege of access to our civil courts is unthinkable both legally and practically,” the government’s brief claimed.

The government claims the U.S. does not have nearly the control over the Bagram Airfield as it does over Guantanamo Bay, and thus the reasoning of the Supreme Court in extending habeas rights to Guantanamo should not apply to Bagram.

It also noted that Bagram is in the midst of a war zone; Guantanamo is not. It asserted that civilian court review of Bagram detentions would actually compromise the military mission in Afghanistan.

The Munaf decision also has no application to Bagram, the government’s motion contended, because that involved U.S. citizens, not foreign nationals.

Lawyers for the Bagram detainees noted that some of them have been held for more than six years, so any argument the Justice Department might have made against habeas rights abroad has now lost its force “after so much time has passed.”

They say the issue “is whether the Executive can create a modern-day Star Chamber, where it can label an individual an ‘enemy combatant’ or ‘unlawful enemy combatant,’ deny him any meaningful ability to challenge that label, and on that basis, detain him indefinitely, virtually incommunicado, subject to interrogation and torture, without any right of redress.”

The lawyers note that the Supreme Court has rejected such efforts at Guantanamo on three occasions. But it added that the government is now seeking “to revive their effort to create a prison beyond judicial scrutiny by arguing that habeas does not extend to Bagram because they have deliberately located their Star Chamber in an airfield they contend is outside their ‘realm,’ for the express purpose of avoiding compliance with domestic civil, criminal, military, and international law.”

Bagram, their brief contended, “is not a temporary holding camp, intended to house enemy soldiers apprehended on the battlefield, for the duration of a declared war, finite in time and space.” It said the “war on terror” as conceived by the government is “unlimited in duration and global in scope.”

It also noted that, unlike Guantanamo, Bagram is a permanent prison. Thousands of individuals from all over the world have been taken to the airfield prison, and nearly 700 remain there now, and it is being expanded with a new prison to hold more than 11,000. Moreover, they argued, Bagram detainees do not even have the minimal procedural guarantees to have their captivity reviewed that Guantanamo prisoners have in the so-called “Combatant Status Review Tribunals.” The military does not operate CSRTs as Bagram.

Lawyers for the four men — two Yemeni, one Tunisian and one Afghan – said none was captured while in battle or otherwise directly aiding terrorist groups.

The Justice Department argued that releasing alleged enemy combatants into the Afghan war zone, or even diverting U.S. personnel there to consider their legal cases, could threaten security.

“What evidence is there to believe they would return to the battlefield?” Judge Bates asked Deputy Assistant Attorney General John O’Quinn. “They were not on the battlefield to begin with.”

William Fisher This e-mail address is being protected from spambots. You need JavaScript enabled to view it has managed economic development programs in the Middle East and elsewhere for the US State Department and the US Agency for International Development. He served in the international affairs area in the Kennedy Administration and now writes on a wide-range of issues, from human rights to foreign affairs, for numerous newspapers and online journals. He blogs at The World According to Bill Fisher.

http://www.pubrecord.org/torture/969.html?task=view
Posted by Alex Constantine at 10:19 AM