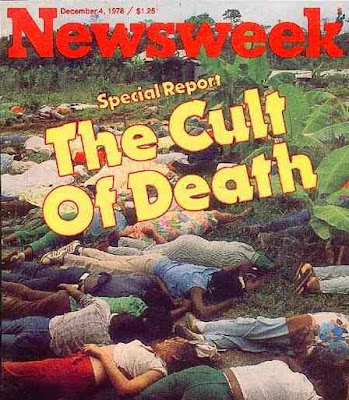 Examinations at the scene were carried out by Guyana's leading pathologist, Dr Mootoo. According to Jim Hougan, a journalist and producer of a documentary of The People's Temple, Motoo claimed to have given the medical evidence to a foreign service officer at the U.S. Embassy. That evidence has never surfaced, nor has the officer. Mootoo refused to talk to the press and leading forensic pathologists have commented about the absence of autopsies and use of embalming at the scene.

Many of the dead were identified by survivors, while others wore plastic wrist-bracelets. All of these i.d.'s were ordered removed just before the dead were eventually shipped back to the US and they arrived, anonymously, in body-bags. No-one knows why. The Guyanese records were destroyed in a fire set by local politicians, who pleaded guilty to the crime without explaining it. Forensic records are unprofessional and incomplete.

Every qualified pathologist knows samples for toxicological analysis must be taken and handled in a particular manner. If there is the slightest possibility of criminal action, the samples must be meticulously labelled and identified, placed into the appropriate tube then immediately labelled with the deceased's name and date.

[Photo] Autopsy kit supplied by British home Office Forensic Service for collection of toxicological samples. There are tubes for liver and stomach contents, containers for blood and urine and a bottle for blood alcohol.

The International Form of Medical Certificate of Cause of Death prescribed by the world Health Organisation calls for statements on the morbid condition directly leading to death, the conditions antecedent to it, the underlying cause of death, and contributory conditions not related to the direct or antecedent causes.

With a view to making uniform the procedure for tabulating statistics and enhancing their usefulness as instruments of research, the Sixth Decennial International revision Conference, meeting in Paris in 1948, agreed that the cause of death to be tabulated should be the underlying cause defined as:
(a) the disease or injury which initiated the train of morbid events leading directly to death or;

The principal deficiencies found in death certificates are:

a) the term describes a symptom that may arise from diseases classified under several different headings of the International List.

b) The term describes a morbid condition that could result from several types of infection or poison and the certifier omits the causative agent.

c) the morbid condition is one that requires for its classification a knowledge of the circumstances in which it arose, in addition to the diagnosis.

Hydrocyanic acid is a solution of HCN in water, either 2 per cent or 4 per cent. Cyanides are extremely poisonous, their action depending upon the inhibition of the respiratory enzyme cytochrome oxidase, which prevents the uptake of oxygen by tissue cells.

Cyanides have a characteristic warning smell of bitter almonds, but up to 80 per cent of the general population have a congenital inability to detect this. Fruit kernels of almonds and cherries may have up to 0.1 per cent cyanide, and a death has been reported from drinking an old bottle of almond liqueur.

Symptoms and death are often very rapid, but not necessarily so. Though some literally drop dead within seconds, many linger for 15-20 minutes, even after substantial doses, depending upon the speed of absorption.

The blood remains pink, due to failure of uptake of oxygen by the tissue. The skin, after death, has a dark, purplish hue.

At autopsy, the smell of cyanide may be obvious; the organs will be congested and dark red. If cyanide has been swallowed in any quantity, the oesophagus and stomach lining will be black, due to erosion and haemorrhage. Certain poisons, such as cyanide, are sometime present in sufficient quantity in the stomach of the deceased to pose a risk to the pathologist.

In 1871 during the Paris Commune, thousands of insurgents were killed in street fighting or by execution. Their bodies were laid out and numbered for identification, and then buried in mass graves at Pere Lachaise cemetery.

Over 100 years into the future, in Jonestown, Guyana over 900 people died from ingestion or perhaps injection of cyanide. They were never properly identified, photographed or autopsied and their total number and manner of death remains unknown.
Posted by Alex Constantine at 4:48 PM