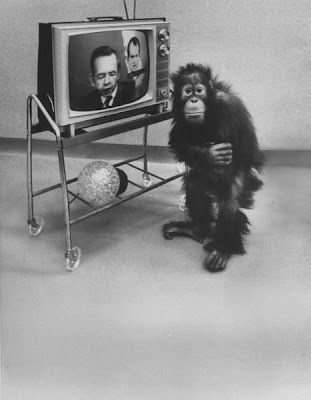 Well-known mind control "expert" Mark Phillips - Kathy O'Brien's controller - is from Yerkes. Much of the content of their books and articles is unadulterated moonshine. - AC

The Yerkes primate center at Emory University has, in the past at least, been a key mind control front. In its heyday, he facility was run by Dr. Geoffrey Bourne.

Dr. Peter G. Bourne was brought into the primate center by his father. Peter was a "special adviser on drug abuse" in three presidential administrations - namely Nixon, Ford and Carter. Dr. Bourne was finally forced to resign in 1979 when he was caught prescribing Quaalude for Carter's staffers.

Mae Brussell has constructed a timeline. From her notes:

From Covert Action (Winter '84, no. 20): "In 1978, Peter Bourne had been implicated by political activists in New York in the mysterious death of a progressive doctor working for a Lincoln Hospital drug detoxification program which was opposed to the methadone maintenance programs of Nelson Rockefeller. Bourne was the last person known to have seen the doctor alive, but as far as is known his involvement was never investigated. In 1977, CAIB staff members saw documentary proof that Peter Bourne provided debriefing reports to the CIA after taking trips abroad, including to Southeast Asia and Pakistan. The details of this story later appeared in the Chicago Sun-Times (July 23, 1978)."

Peter Bourne ran the psychiatry division at the Granada medical school at the time of the invasion. Bourne advised the state dept. and CIA at the time. He and Eric Gairy (voodoo practitioner, UFO watcher, despot) were close.